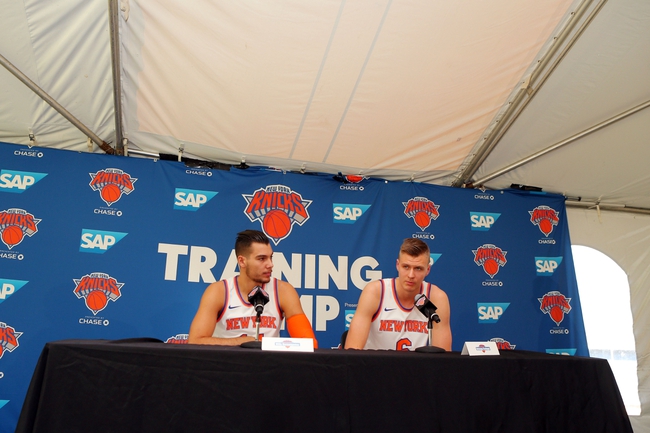 The Line: Knicks -3 -- Over/Under: Click to Get Latest Betting Odds

The Brooklyn Nets have nowhere to go but up after 20 wins last season and hope they’re on the right track in their rebuild. The Nets have an almost entire new starting five that includes D'Angelo Russell, Allen Crabbe, DeMarre Carroll and Timofey Mozgov. Obviously it’s going to take some time for those guys to gel and get comfortable, but all four of those players should be out to prove themselves after subpar play other places, so this could be a feisty, hardworking team. As for the young guys who will look to earn respect in preseason play are Texas rookie Jarrett Allen, backup point guard Isaiah Whitehead and two-time first-team Big Sky player Jeremy Senglin. The Brooklyn Nets have a lot of new faces and are in a new era with Brook Lopez now with the Los Angeles Lakers. This is sure to be an interesting year for the Nets, good or bad.

The New York Knicks are another team that’s in a transition year given the trade of Carmelo Anthony and making Kristaps Porzingis the new face of the franchise. It may take some time adjusting to the fact Melo is no longer around, but rookie point guard Frank Ntilikina has star potential and Enes Kanter is a consistent scorer in the post, even if his lack of defense is a serious issue. Doug McDermott is a shotmaker who could thrive under the bright lights and Michael Beasley has always been an offensive talent even though his off-the-court issues have received more headlines. As for preseason players, guys such as Nigel Hayes, Jamel Artis and Xavier Rathan-Mayes are worth a look. The New York Knicks have a lot of question marks and certainly aren’t a playoff team this year, but they have some interesting storylines.

This is an interesting game because the Nets have more talent but are a new roster that may take some time to gel. The Knicks have a lot more young players and open playing time, which usually results in better play in preseason. Bad teams usually have more success in preseason due to guys laying it on the line to earn consistent regular season minutes. So, I'll take the Knicks and lay the bucket at home.