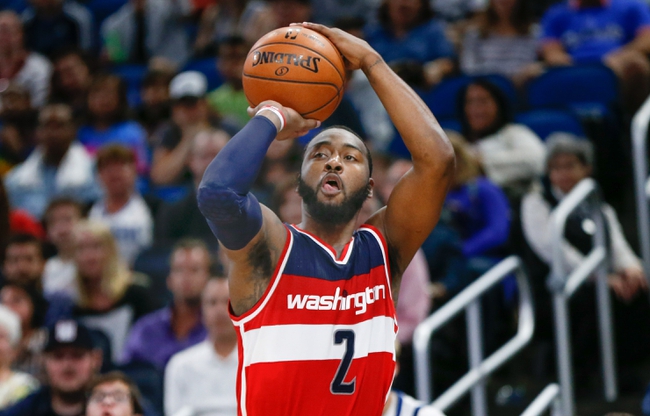 The New York Knicks and the Washington Wizards take the floor in Friday NBA action.

The New York Knicks look for a win at the Washington Wizards on Friday night. The Knicks hope to rebound from a 115-107 defeat at the hands of the Brooklyn Nets where the defense struggled to get enough stops. The NYK were outshot 43.7%-38.3%  with Brooklyn connecting at a torrid 16-32 pace from beyond the arc which was the difference. New York was led by the twosome of Enes Kanter and Tim Hardaway Jr. with 17 points apiece with Hardaway logging seven rebounds while Kristaps Porzingis added 15 points and five boards. Courtney Lee gave New York another 12 points while Willy Hernangomez and Michael Beasley combined for 14 points and 20 rebounds.

The Washington Wizards look for their second victory of the preseason with the New York Knicks coming to town. The Wizards opened their schedule with a never in doubt 126-96 rout of the Long Lions (China) that was more of an exhibition game then anything. The only surprise was that the margin of victory wasn’t larger as the Wizards had every advantage. Washington held the Lions to less then 40% from the floor  while burning the nets at nearly 60% with a +30 on the backboards. The Wizards had seven players reach double figures in scoring Jodie Meeks leading the way with 19 points on 7-9 from the floor with Sheldon Mac tossing in 17 points on 6-9 from the field while Tomas Satoransky was next in line with 13 points. Four others netted between 10-12 points in a game that told us nothing about Washington.

Trends are not available for this game yet.

Lines have not been released so please check back.