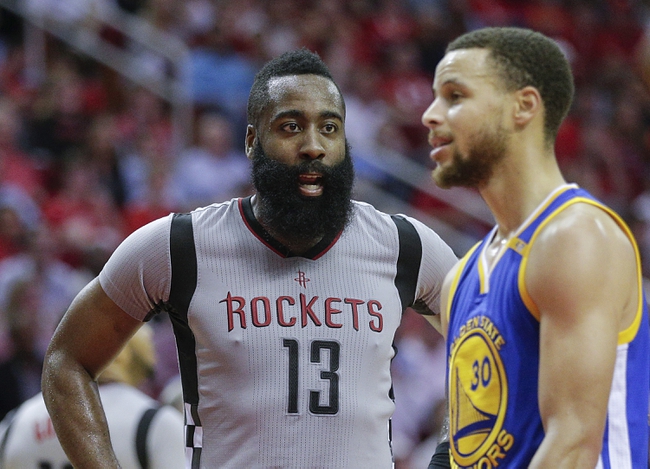 The Houston Rockets won 55 games last season and made a bunch of moves during the offseason in hopes of closing the gap with the Warriors. Chris Paul will join James Harden in the backcourt, giving the Rockets two of the best ball handlers in the game and insuring the offense will run smoothly at all times. Former Raptor P.J. Tucker will come off the bench and provides defense and outside shooting, while Luc Mbah a Moute is a lengthy body who is coming off possibly his best offensive season of his career. The Rockets did lose a ton of depth in the trade to get CP3, but that’s the price to pay for possibly the best pure point guard, and Trevor Ariza, Ryan Anderson and Clint Capela still round out a solid starting five. Overall, the Rockets will continue to be that team that shoots 35 threes a night, and when they fall, they’re extremely tough to beat. The Houston Rockets have split their last 10 regular season road games.

The Golden State Warriors enter another season as the clear frontrunners for the NBA title due to returning all of the key players from last years squad. A nucleus of Stephen Curry, Klay Thompson, Kevin Durant and Draymond Green helps create one of the most talented teams in NBA history. All four guys are some of the best players on the planet and they’re all still under 30 years old. As if that weren’t enough, the bench got a boost in former starter Nick Young, and guys such as Patrick McCaw and JaVale McGee will continue to thrive with a season under their belts. There’s not much to say about the Warriors that hasn’t been said already, this team is simply not fair and will almost never lose when it plays to its full potential. The Golden State Warriors have won 10 of their last 11 regular season home games. Andre Iguodala and Omri Casspi are questionable for this game.

It's likely going to take the Rockets a few games to figure out how to manage having Harden and CP3 on the floor at the same time. Practice and a couple preseason games doesn't exactly create the chemistry needed for regular season play. The Warriors are a well oiled machine who is unbeatable when they play to their potential, and with two rings in three years, all the hoopla that comes with ring night shouldn't be that big a deal this time around. I know Golden State was smacked around in last years opener, but that was a Spurs squad that's used to playing together. This isn't the case with a Rockets squad adding a new key piece. I'm not a fan of laying big numbers early in the season, but I'm more confident in a Warriors blowout than I am Rockets keeping this close.