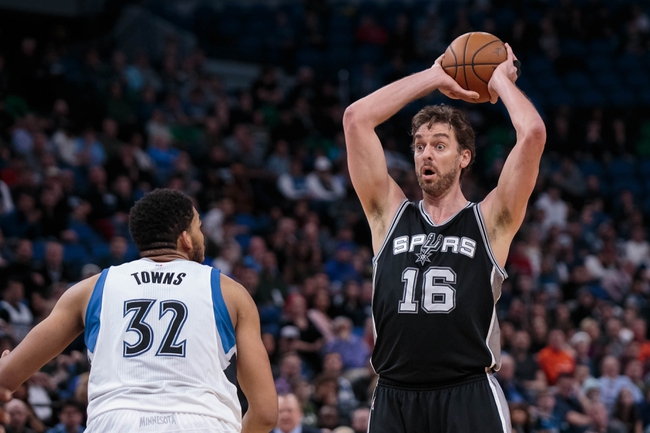 The San Antonio Spurs will be without Kawhi Leonard as they host the Minnesota Timberwolves at the AT&T Center on Wednesday night.

The San Antonio Spurs will be eyeing revenge after getting swept by the Golden State Warriors in the Western Conference Finals after their leader in Kawhi Leonard sprained his ankle on Zaza Pachulia’s foot. As is always the case, the Spurs quietly finished with a 61-21 record to finish with the second seed in the West and it wouldn’t surprise anyone if they won another 60 games this season. Leonard will obviously be the leader on both ends of the floor, but the Spurs need much more from LaMarcus Aldridge who disappeared in the playoffs. Patty Mills will likely step into the starting lineup for the injured Tony Parker while Manu Ginobili will remain with the team for at least one more season as coach Popovic continues to use him “like a bar of soap”.

Meanwhile, the Minnesota Timberwolves will be absolutely giddy about this new season as they made plenty of moves to construct what now looks like a playoff-calibre team. Jeff Teague is the team’s new starting point guard and his pick and roll offense along with his shooting should be a major asset to the Wolves, but the biggest acquisition for the franchise has to be Jimmy Butler who will be the primary scoring option to allow Karl-Anthony Towns to pick and choose whether he plays inside or on the perimeter where he has developed the three-point shot. Other notable inclusions include Taj Gibson and Jamal Crawford who are proven bench contributors to round out what looks like a very well-rounded roster.

This figures to be a promising season for the Timberwolves who look to have caught the Spurs at just the right time given that Leonard won’t play in this game. It wouldn’t surprise anyone if the Spurs still find a way to win this game by double digits, but I’m going with the young Wolves to kick off their season with a narrow win over the Spurs who have struggled in recent times when Leonard play.