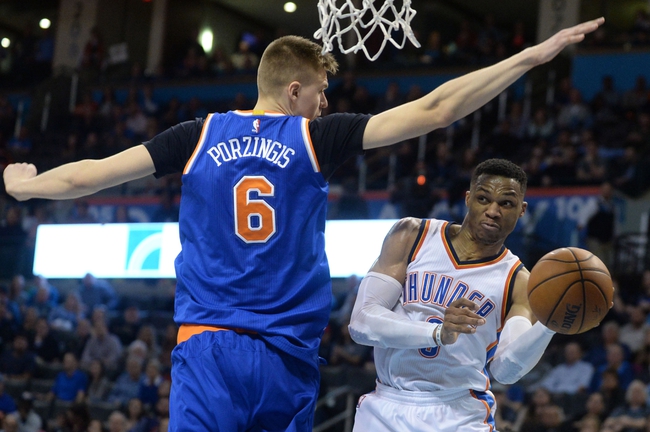 The New York Knicks pay a visit to the new-look Oklahoma City Thunder at the Chesapeake Energy Arena on Thursday night.

The New York Knicks will be looking to move on from the Carmelo Anthony era after shipping him off to Oklahoma City for Enes Kanter, Doug McDermott and a second-round draft pick who they used to sign Frank Ntilikina from France. Enjoying his second stint with the Knicks is Tim Hardaway Jr. who signed as a restricted free agent for $71 million over four years, but the bottom line is that the Knicks organisation look to finally be handing the keys to Kristaps Porzingis who could be in for a breakout season. I’m not confident the Knicks will be able to improve on last season’s 31-51 overall record, but with Phil Jackson and the triangle offense now long gone, the Knicks have a fresh start this season.

Meanwhile, the Oklahoma City Thunder made plenty of noise in the offseason as they signed Paul George and Carmelo Anthony to team up with the reigning MVP in Russell Westbrook who shouldered all the scoring burden last season. With Andre Roberson and Steven Adams to complete the starting lineup, the Thunder now look like a legitimate contender in the league. However, if you saw their game against the Australian NBL team in which they snuck past the Melbourne United by one point, you would see that they are a work in progress and it’ll just take some time for them to really gel as a unit. This team was built to contend for a championship and last season’s 47-35 overall record should be set as the floor for this revamped lineup.

Head to head, the home team is 5-2 ATS in the last seven meetings and the under is 7-3 in the last 10 meetings in Oklahoma City.

No one really knows what we’re going to get from the Knicks now that Porzingis is the primary scoring option on a team lacking start talent and the opposite can be said for Anthony with his new team in the Thunder. I think we’re going to see a sloppy game with plenty of turnovers from both sides, but it’s hard to look past the Thunder to run away with this one at home, based on star power alone. Give me the Thunder to win this one by double digits behind their big three of Westbrook, George and Anthony.