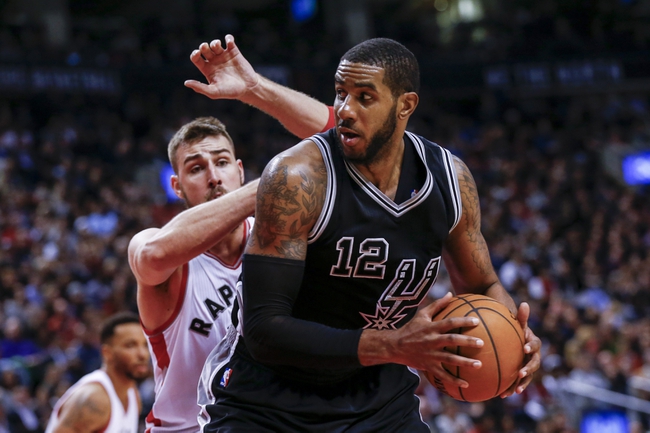 The Toronto Raptors pay a visit to the AT&T Center to take on the San Antonio Spurs on Monday night.

The Toronto Raptors will be aiming to improve to 3-0 on the season after making light work of the 76ers in a 128-94 blowout win on Saturday. DeMar DeRozan poured in 30 points in just 27 minutes of action, Serge Ibaka added 21 points while Kyle Lowry chipped in with 17 points and five assists. As a team, the Raptors shot 47 percent from the field and just 13 of 44 from the three-point line, but this game was over before it really began as the Raptors closed the first quarter on a 21-4 run to put the game beyond doubt early.

Meanwhile, the San Antonio Spurs will also be looking to improve to 3-0 after grinding their way to an 87-77 win at Chicago on Saturday. LaMarcus Aldridge continued his hot start to the season with a game-high 28 points. Rudy Gay added 12 points while Pau Gasol chipped in with 10 points and four assists, but no other player finished in double figures in scoring as the Spurs shot just 40 percent from the field and one of 12 from the three-point line. Tony Parker and Kawhi Leonard both sat out the game with injuries and neither are expected to be available for Monday’s game.

The Spurs are always tough to beat at home but you just figure the Raptors won’t have a better opportunity to pull off the minor upset. I can’t say that I’m too confident, but the Raptors really should be good enough to take advantage of this shorthanded Spurs outfit at this early stage of the season.