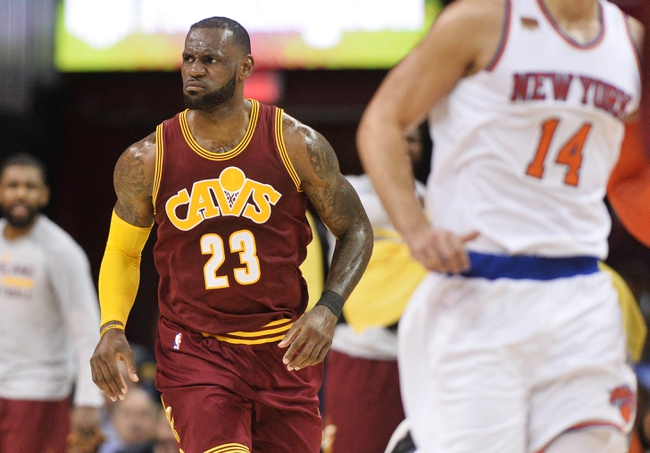 The New York Knicks pay a visit to the Cleveland Cavaliers at the Quicken Loans Arena on Sunday night.

The New York Knicks were able to snap a three-game skid with a 107-86 rout of the shorthanded Nets on Friday night. Kristaps Porzingis dominated with 30 points on 13 of 24 shooting, Courtney Lee added 13 points while Enes Kanter and Doug McDermott chipped in with 12 points each. As a team, the Knicks shot just 45 percent from the field, but the effort was clear as they outrebounded the Nets by 55-34 and holding them to just 40 percent shooting from the field to earn their first win of the season.

Meanwhile, the Cleveland Cavaliers have lost three of their last four games to fall to 3-3 on the season and they’ll be hoping to avoid a third straight defeat after last night’s 123-101 loss at New Orleans. Kevin Love led the team in scoring with 26 points and 11 rebounds, LeBron James added 18 points with eight assists while Dwyane Wade returned to the court to chip in with 15 points off the bench. As a team, the Cavs shot 46 percent from the field and 12 of 32 from the three-point line, but they had no answer for the Pelicans who outscored them in the paint by 70-38. Derrick Rose sat out his fourth straight game with an ankle injury, but he is likely to suit up Sunday.

The Cavs are clearly in a bit of a slump as they’re dealing with injuries to their guards which has forced James to start at the point guard position, but they’re up against a struggling Knicks team who have only beaten the Nets so far this season. It’s difficult to back the Cavs the way they’ve been playing, but with Rose likely to return against his former team, I think the Cavs snap out of their funk with a double-digit home win tonight.