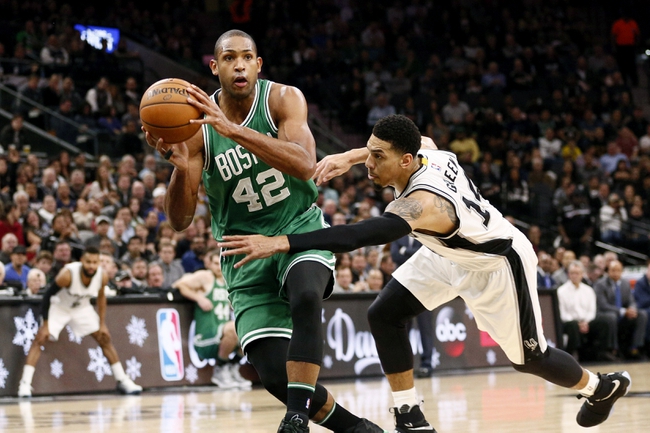 The San Antonio Spurs invade the TD Garden to take on the Boston Celtics on Monday night.

The San Antonio Spurs will be hoping to avoid a third straight loss after last night’s 97-94 loss at Indiana. LaMarcus Aldridge led the team with 26 points on 10 of 21 shooting, Pau Gasol added 17 points while Danny Green chipped in with 10 points. As a team, the Spurs shot 40 percent from the field and nine of 28 from the three-point line but in a tight contest, it was the Pacers who came out on top as Victor Oladipo drained a clutch step-back three-pointer with just over 10 seconds left to play. With the loss, San Antonio drops to 4-2 on the season and 2-2 on the road. Kawhi Leonard and Tony Parker continue to miss games with quad injuries and it is unclear when either player will return to the court.

Meanwhile, the Boston Celtics will be looking to build on their four-game win streak after escaping Miami with a 96-90 win on Saturday. Kyrie Irving scored nine of his 24 points in the fourth quarter to lead his team with a game-high 24 points on 10 of 23 shooting. Jayson Tatum added 20 points while Marcus Smart chipped in with 16 points off the bench as the Celtics shot just 42 percent from the field and six of 23 from the three-point line. Marcus Morris sat out his sixth straight game but he is a chance to return to the court sometime in the coming week.

The injuries finally seem to be catching up with the Spurs as they’re suddenly staring down the barrel of a third straight loss after winning their first four games of the season. The Celtics are obviously dealing with injuries themselves but they’ve been red-hot lately thanks to their leader in Irving so I think they’ll come away with the win and cover at home against a shorthanded Spurs team playing on zero days' rest.