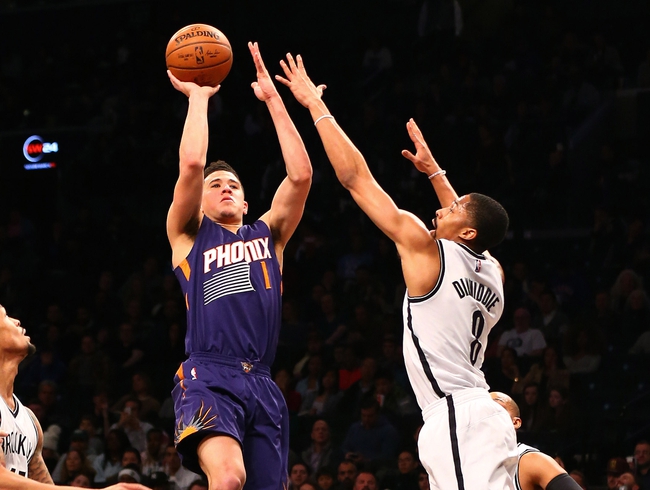 The Phoenix Suns travel pay a visit to the Brooklyn Nets at the Barclays Center on Tuesday night.

The Phoenix Suns looked to be gaining momentum as they reeled off two straight wins of the Kings and the Jazz, but they’ll now be looking to bounce back after Saturday’s 114-107 loss at Portland. Devon Booker led the way with a game-high 34 points, six rebound and six assists on 11 of 19 shooting, TJ Warren and Alex Len chipped in with 12 points each while Josh Jackson had 10 points. As a team, the Suns shot just 42 percent from the field and nine of 26 from the three-point line, but they did a great job of hanging with the Trailblazers right till the end which is a bit of a moral victory when you consider that they were blown out by 48 points when these teams last met.

Meanwhile, the Brooklyn Nets have lost three of their last four games and they’ll be hoping to avoid a third straight loss after falling to the Nuggets by 124-111 on Sunday. Spencer Dinwiddie tied a career high with 22 points off the bench, Rondae Hollis Jefferson added 18 points while Joe Harris chipped in with 16 points. D’Angelo Russell scored 12 points with eight assists but played just 24 minutes as the Nuggets put the game to bed early with a dominant 40-21 third quarter effort. As a team, the Nets shot 40 percent from the field and 12 of 31 from the three-point line.

I never like to get my hard-earned money involved in these matchups as you don’t know what you’re going to get from these two teams. The Suns weren’t far from pulling off the upset against the Blazers in their last outing but they’re still without a win on the road while the Nets have lost their last two games by double-digits after pulling off the upset over the Cavaliers on Wednesday. With that being said, I feel that the Nets should be able to bounce back at home against the young Suns, but I can’t say I’m too confident.