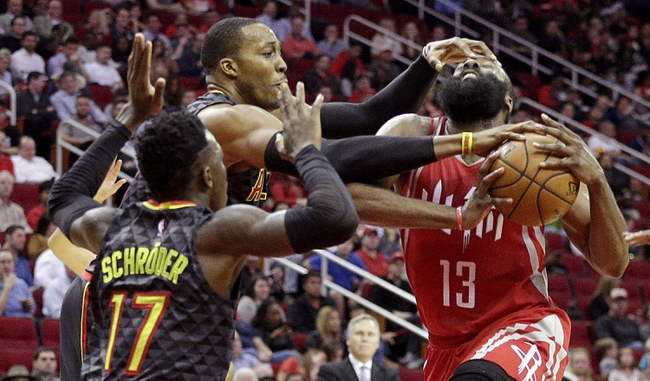 The Houston Rockets and the Atlanta Hawks duke it out at the Philips Arena on Friday night.

The Houston Rockets are a solid 6-3 after nine games and they will be hoping to stay hot after Wednesday’s 119-97 blowout win at New York. Six Rockets players finished in double figures in scoring and it was James Harden who led the way with 31 points and nine assists. Ryan Anderson added 21 points, Eric Gordon scored 17 while Trevor Ariza chipped in with 16 points as the Rockets shot 47 percent from the field and 19 of 52 from the 3-point line. With the win, Houston improves to an impressive 5-1 on the road.

Meanwhile, the Atlanta Hawks are mired in a horrid seven-game losing streak after falling to the 76ers by 119-109 on Wednesday. Dennis Schroder led the team with 25 points and six assists, Taurean Prince added 17 points with 11 rebounds while Luke Babbitt chipped in with 16 points off the bench. As a team, the Hawks shot 43 percent from the field and eight of 23 from the 3-point line but the Hawks were always fighting an uphill battle after falling behind by 25-8 early in the game.

The Rockets have lost seven straight against the Hawks including four in a row at the Philips Arena, but I don’t see those trends continuing tonight. The Rockets looked great in their dominant win over the Knicks and I’m predicting more of the same in this matchup. Give me the Rockets to make light work of this one as they win by double digits on the road where they’ve been rock-solid so far.