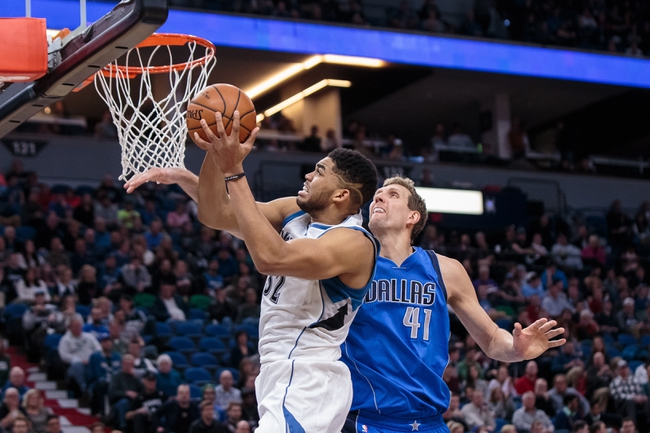 The Dallas Mavericks pay a visit to the Target Center to battle the Minnesota Timberwolves on Saturday.

The Dallas Mavericks have won just one game so far this season and they will be hoping to snap a five-game skid after last night’s 99-94 loss to the Pelicans. Harrison Barnes led the team with 26 points on nine of 17 shooting, Dennis Smith Jr. added 16 points while JJ Barea chipped in with 13 points and five assists off the bench. As a team, the Mavs shot 37 percent from the field and nine of 34 from the three-point line, but they left themselves too much ground to make up as they fell behind by as many as 17 points midway through the third quarter before pouring in 31 points in the fourth quarter.

Meanwhile, the Minnesota Timberwolves will be gunning for a fourth straight victory after sneaking past the Pelicans in a 104-98 road win on Wednesday. Jimmy Butler led the team in scoring with 23 points, Andrew Wiggins added 18 points while Taj Gibson finished with a double-double of 11 points with 12 rebounds. As a team, the Timberwolves shot 49 percent from the field and just six of 22 from the three-point line, but it was really the bench scoring that was the difference as the Timberwolves’ reserves outscored the Pelicans’ reserves by 45-17 because Karl-Anthony Towns scored just two points as he was plagued with foul trouble.

The Mavs have been in a world of hurt all season as they just can’t hang with the better teams in the league. With that being said, the Mavs showed plenty of fight in the fourth quarter last night to avoid a blowout loss, but I don’t see them hanging around too long with the Timberwolves who have been on a tear lately. Give me the home team Timberwolves to pull away in the second half against a struggling Mavs team playing on zero days’ rest.