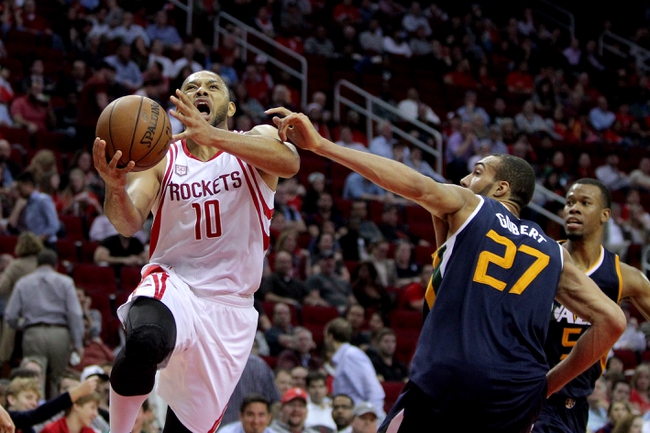 The Utah Jazz pay a visit to the Houston Rockets at the Toyota Center on Sunday night.

The Utah Jazz will be hoping to bounce back from Friday’s 109-100 loss to the Raptors which snapped a three-game win streak. Donovan Mitchell led the team in scoring with 25 points off the bench, Rodney Hood added 17 points while Rudy Gobert chipped in with 15 points as the Jazz shot 44 percent from the field as a team. However, the Raptors shot 54 percent from the field and poured on 36 points in the third quarter to change the tide of the game thanks to DeMar DeRozan who finished with a game-high 37 points. With the loss, Utah drops to 5-4 on the season and 5-1 at home.

Meanwhile, the Houston Rockets have won seven of their first 10 games and they will be gunning for a third straight win after blowing past the Hawks by 119-104 on Friday. James Harden led the way with 29 points and 11 assists while Eric Gordon and Luc Richard Mbah a Moute added 20 points apiece. As a team, the Rockets shot 47 percent from the field and 16 of 47 from the three-point line and most of their damage was done in the first half where they poured on 69 points to set up the easy victory.

The Rockets have been in great form but they’ve actually lost their last two home games so they’ll be eager to put a halt to that skid, while the Jazz had won three straight before their hiccup against the Raptors, so this could be a close one. I think the Rockets continue their strong form and come out on top but the Jazz have been playing great themselves, so I’m taking them with the points in what should be a close one.