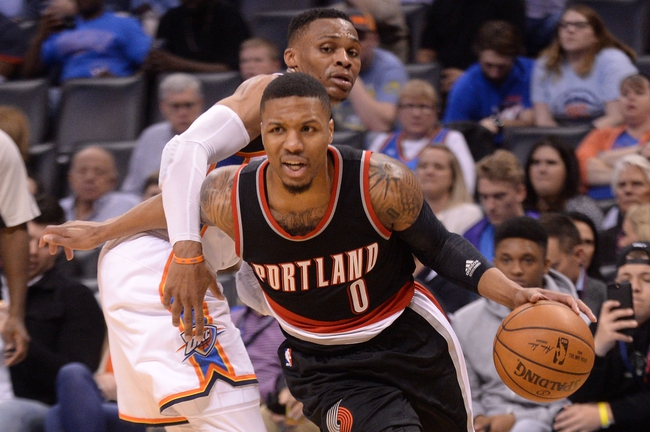 The Oklahoma City Thunder and the Portland Trailblazers collide at the Moda Center on Sunday night.

The Oklahoma City Thunder have won three of their last five games but they will be smarting from Friday’s 101-94 home loss to the Celtics. Paul George led the scoring with 25 points and 10 rebounds, Russell Westbrook added 19 points with six rebounds and 11 assists while Jerami Grant chipped in with 11 points off the bench, but Carmelo Anthony struggled as he shot just three of 17 for his 10 points. However, you couldn’t blame the loss completely on Anthony as the Thunder had this game seemingly locked up early as they led by 18 points going into halftime, but they managed just 16 points in the third quarter and they couldn’t stop Kyrie Irving who torched them for 15 points in the fourth quarter.

Meanwhile, the Portland Trailblazers have lost three of their last five games but they will still be feeling the glow from Thursday’s dramatic 113-110 win over the Lakers. CJ McCollum drained five three-pointers on his way to 22 points while Jusuf Nurkic added 28 points with five assists, but the game was tight in the second half and with the game on the line, the ball went to Damian Lillard who drained the game-winning three to finish with 32 points. The Blazers probably should’ve blown out the Lakers as they led by as many as 19 points in the second quarter, but their defense held up just enough to set the stage for Lillard’s heroics.

The Blazers will be beaming with confidence following Thursday’s thrilling win, but they really could have lost that game if the Lakers weren’t so sloppy with the ball down the stretch. Meanwhile, the Thunder will be feeling a little embarrassed that they loss after leading by 18 points at halftime against the Celtics, so I’m looking for them to come out firing. In what should be a close game, I’m taking the Thunder to get the win and cover as they’ll be itching to get back on the court to atone for Friday’s loss.