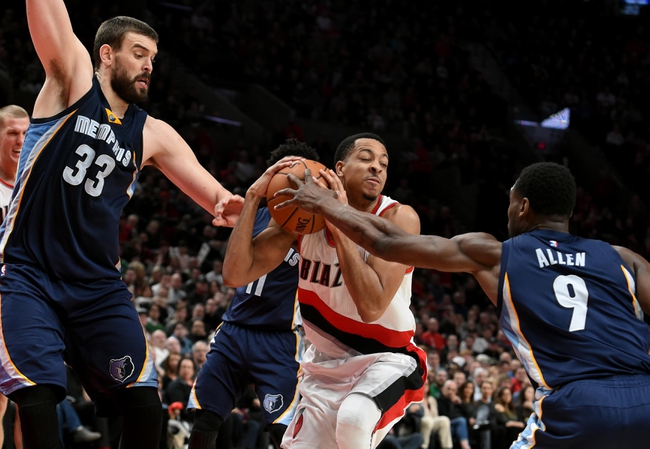 The Memphis Grizzlies pay a visit to the Portland Trailblazers at the Moda Center on Tuesday night.

The Memphis Grizzlies have lost three of their last four games and they will be looking to bounce back from Sunday’s 107-102 loss to the Lakers. Tyreke Evans led the team in scoring with 26 points off the bench, Mike Conley added 23 points while Marc Gasol chipped in with 15 points, 10 rebounds and seven assists but shot just six of 18 from the field. As a team, the Grizzlies shot 46 percent from the field and 11 of 37 from the three-point line, but playing on zero days’ rest seemed to be effecting them as they were always a step behind, especially in the penultimate third quarter where they were outscored by 26-16.

Meanwhile, the Portland Trailblazers will be gunning for a third straight win after sneaking past the Thunder in a 103-99 home win on Sunday. Damian Lillard led the team with 36 points and a season-high 13 assists, Jusuf Nurkic added 25 points on 11 of 15 shooting while CJ McCollum drained six three-pointers on his way to 22 points. As a team, the Blazers shot 50 percent from the field and seven of 20 from the three-point line but they couldn’t really gain any separation from the Thunder until they went on a run late in the third quarter to take a 16-point lead going into the fourth quarter where the Thunder would make a run that would fall just short. With the win, Portland improved to 6-4 overall and 4-2 at home.

The Grizzlies’ final score against the Lakers is a little flattering as they really weren’t in the game at all, but you have to say that fatigue played a role because the Grizzlies looked great in their win over the Clippers the previous night. The Blazers haven’t been in red-hot form but they’ve been good enough to win their last two games and I think they’ll be good enough to come out on top at home with Lillard and McCollum in great form.