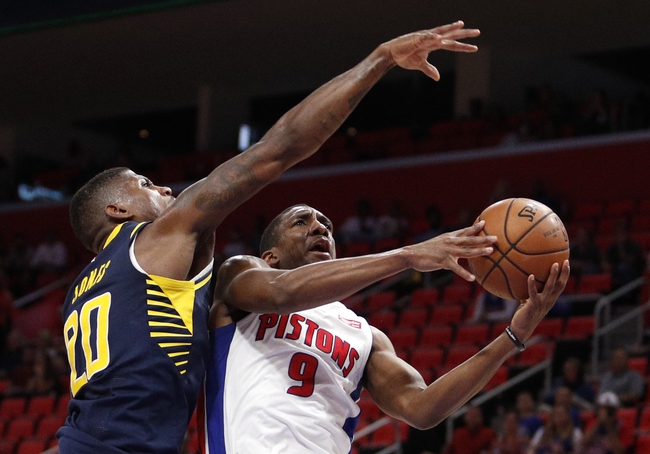 The Indiana Pacers and the Detroit Pistons duke it out at Little Caesars Arena on Wednesday night.

The Indiana Pacers will be looking to put a halt to a three-game skid after last night’s 117-112 home loss to the Pelicans. Myles Turner played without a minutes restriction and led the team with 21 points, 12 rebounds and three blocks, Victor Oladipo added 15 points while Lance Stephenson and Bojan Bogdanovic chipped in with 14 points each. As a team, the Pacers dominated the first half to take a 75-61 lead going into halftime but they quickly saw their 14-point lead disappear as the Pelicans dominated the third quarter by 35-19 to take control of the game. With the loss, Indiana falls to 5-6 overall and 3-2 at home.

Meanwhile, the Detroit Pistons have won five of their last six games and they will be hoping to extend their current win streak to three after Saturday’s 108-99 win over the Kings. Avery Bradley led six players in double figures with 24 points, Tobias Harris added 20 points with five assists while Andre Drummond racked up 16 points with 19 rebounds and four assists. As a team, the Pistons shot 50 percent from the field and 13 of 24 from the three-point line. Jon Leuer missed the game with an ankle sprain while Stanley Johnson is considered day to day after leaving in the third quarter with a sore hip flexor.

The Pacers will be eager to avoid a fourth straight loss but they've run into a red-hot Pistons team looking for a third straight win. I really like the Pacers with Turner back in the starting lineup, but they actually haven't won a game since his return to the court which is a little surprising, so it's hard to back them to pull off the upset on zero days' rest. The betting trends are in favor of the Pacers in this matchup, but I'm sticking with the in-form Pistons at home where they are 3-1-1 ATS in their last five games.