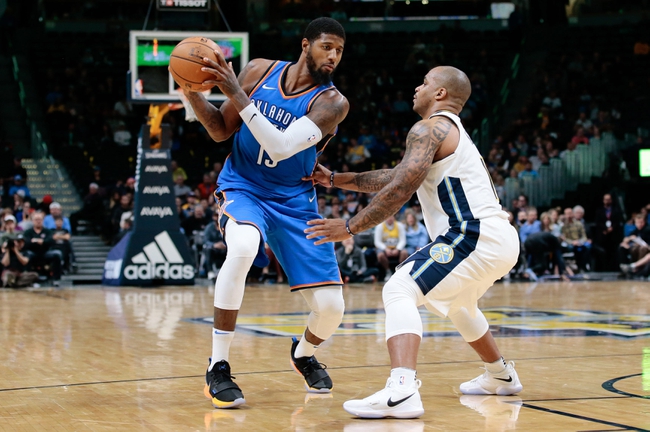 The Oklahoma City Thunder invade the Pepsi Center to take on the Denver Nuggets on Thursday night.

The Oklahoma City Thunder have lost four of their last six games and they will be hoping to snap a three-game skid after falling to the Kings by 94-86 on Tuesday. As a team, the Thunder endured their worst shooting night of the season as they shot just 34 percent from the field and 10 of 37 from the three-point line. Russell Westbrook scored 20 points with 12 rebounds and six assists but shot just seven of 21 from the field, Carmelo Anthony shot just four of 17 for his 16 points while Paul George shot four of 16 for his 12 points. The Thunder took a 25-10 lead after the first quarter but managed just 16 points each in the second and third quarters where the Kings’ reserves took control of the game. With the loss, Oklahoma City drops to 4-6 on the season and 2-4 on the road.

Meanwhile, the Denver Nuggets have been in great form as they’ve won five of their last seven games and they will be hoping to build on Tuesday’s 112-104 home win over the Nets. Nikola Jokic exploded for a career-high 41 points on 16 of 25 shooting to go along with 12 rebounds and five assists while Paul Millsap and Will Barton contributed 17 points each. As a team, the Nuggets shot 47 percent from the field as they dominated the Nets to lead by as many as 25 points in the third quarter. With the easy win, Denver improved to 6-5 on the season and 4-2 at home.

I don’t know what has happened to the Thunder but they’ve really gone ice-cold after starting the season so strongly. Meanwhile, the Nuggets have been in great form and looked particularly good against the Nets on Tuesday. I wouldn’t be surprised at all if the Thunder snapped out of it and won this game by double digits, but the Nuggets have been on a roll lately and should be good enough to come out on top in a close finish.