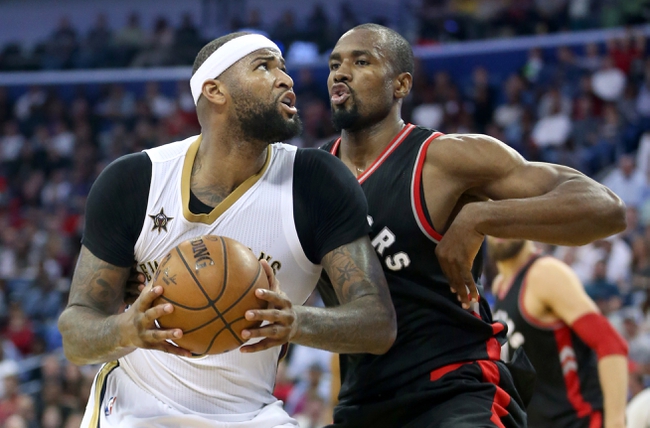 The New Orleans Pelicans pay a visit to the Toronto Raptors at the Air Canada Centre on Thursday night.

The New Orleans Pelicans will be looking to cap off their four-game road trip with a fourth straight win after sneaking past the Pacers by 117-112 on Tuesday. Anthony Davis dominated the game with an efficient 37 points on 14 of 18 shooting to go along with 14 rebounds and four assists while DeMarcus Cousins added 32 points with 13 rebounds and six assists. As a team, the Pelicans shot 50 percent from the field and 14 of 35 from the three-point line but they couldn’t get anything going until the third quarter where they outscored the Pacers by 35-19 to overcome a 14-point halftime deficit. With the hard-fought win, New Orleans improved to 6-5 overall and 5-2 on the road.

Meanwhile, the Toronto Raptors have won four of their last six games and they will be looking to build on Tuesday’s 119-114 home win over the Bulls. DeMar DeRozan led from the front with 24 points on nine of 18 shooting, Jonas Valanciunas added 21 points with 10 rebounds while Kyle Lowry chipped in with 17 points and six assists. As a team, the Raptors shot a healthy 54 percent from the field and 13 of 25 from the three-point line as they held on for the narrow win after almost blowing a 23-point lead. With the win, Toronto improved to 6-4 on the season and 3-1 at home.

The Pelicans have been playing very well lately as Cousins and Davis have been absolutely putting up numbers. However, the Pelicans are just 3-11-1 ATS in the last 15 meetings against the Raptors who have been playing solid basketball themselves. This one should be a close one but I like Raptors to get the win and cover at home where they’ve been solid so far.