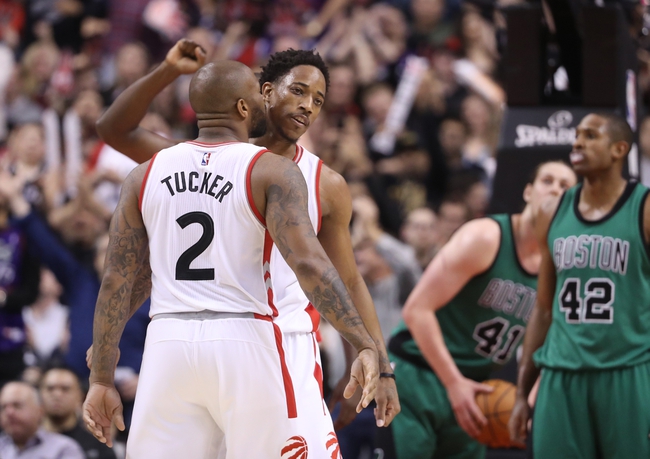 The Toronto Raptors and the Boston Celtics duke it out at the TD Garden on Sunday afternoon.

The Toronto Raptors have won five of their last seven games and they will be aiming for a third straight win after sneaking pas t the Pelicans in a 122-118 home win on Thursday. DeMar DeRozan led the way with 33 points and eight assists, Serge Ibaka added 19 points with eight rebounds while Kyle Lowry chipped in with 18 points and seven assists. As a team, the Raptors shot 46 percent from the field and 16 of 42 from the three-point line as the Raptors took down the Pelicans for the 13th time in 16 meetings. Defensively, the Raptors allowed the Pelicans to shoot a healthy 54 percent from the field but they dominated the boards by 61-45 while combining for 38 second chance points and points off turnovers.

Meanwhile, the Boston Celtics have been the hottest team in the league and they will be looking to extend their current win streak to 12 games after sneaking past the Hornets in a 90-87 home win on Friday. Shane Larkin and Jayson Tatum led the team in scoring with 16 points each, Terry Rozier added 15 points while Marcus Morris chipped in with 14 points as the Celtics dominated the second half by 49-30 to overcome an early 17-point deficit. What made the win more impressive was that the Celtics actually lost Kyrie Irving after just two minutes as he suffered a facial fracture from an inadvertent elbow from teammate Aron Baynes, leaving him in doubt for Sunday.

The Boston Celtics have had injured players in and out of the lineup and still find ways to win. So, while Kyrie doesn't seem to be playing in this game, the Celtics are getting Horford back, which is enough for me to take the free bucket. Boston has done nothing but win and cover games this season no matter what happens. The Raptors also blow games they should win from time to time. The value is with the Celtics and the free bucket here based on the way they've played all season.