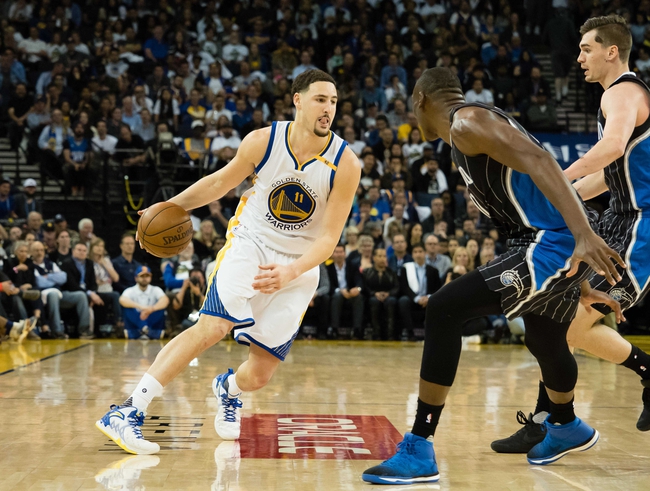 The Orlando Magic pay a visit to the Golden State Warriors at the Oracle Arena on Monday.

The Orlando Magic have lost three of their last five games and they will be looking to bounce back after getting routed by the Nuggets in a 125-107 road loss on Saturday. Mareese Speights led the scoring with 19 points off the bench, Jonathan Simmons and Evan Fournier added 18 points each while Aaron Gordon chipped in with 13 points and five assists. As a team, the Magic shot 47 percent from the field and 11 of 31 from the three-point line, but they were always fighting an uphill battle after falling behind by 70-47 going into the halftime break. The Nuggets simply rolled through them thanks largely to Jamal Murray who drained six three-pointers on his way to a career-high 32 points. With the loss, Orlando dropped to 8-5 on the season and 4-3 on the road.

Meanwhile, the Golden State Warriors have won 10 of their first 13 games of the season and they will be aiming to extend their current win streak to seven after Saturday’s 135-114 win over the 76ers. Kevin Durant led the team with 29 points, Klay Thompson had 23 points while Stephen Curry finished with 22 points and nine assists. As a team, the Warriors shot 59 percent from the field and 14 of 27 from the three-point line as they dominated the second half by 70-50 to pull away from the 76ers after what was a closely contested first half. With the easy win, Golden State improved to 10-3 overall and 5-2 at home. Curry suffered a minor hip contusion on Saturday and is currently listed as questionable for this game.

The Magic have been one of the surprise teams of the league but they’re running into a Warriors team who are firing on all cylinders as they’ve won six games by an average of 21.5 points. The Magic are certainly capable of pulling off the upset, but I just don't see that happening while the Warriors are playing this well. Give me the Warriors to remain red-hot with another double-digit win and cover in this one.