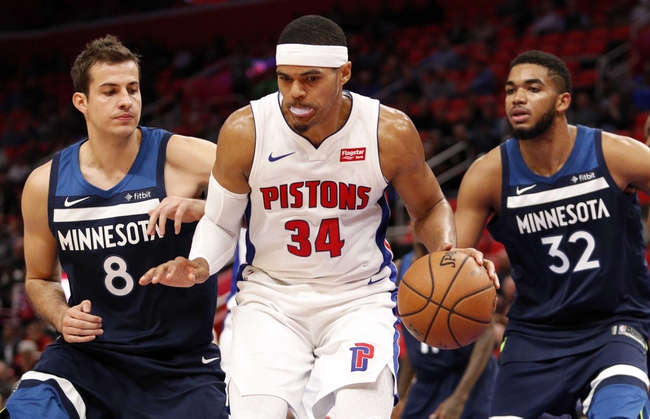 The Detroit Pistons and the Minnesota Timberwolves do battle at the Target Center on Sunday.

The Detroit Pistons have really cooled off from their five-game win streak with a couple losses on the trot and they will be hoping to bounce back after Friday’s 107-100 loss at Indiana. Reggie Jackson and Avery Bradley led the team in scoring with 16 points apiece, Ish Smith and Tobias Harris chipped in with 15 points each while Andre Drummond had 11 points with 15 rebounds and five assists. As a team, the Pistons shot 42 percent from the field and 14 of 33 from the three-point line, but they were unable to get the job done despite leading by as many as 22 points. Defensively, the Pistons were able to keep a lid on the Pacers until the fourth quarter where they were outscored by 36-19. With the loss, Detroit dropped to 10-5 on the season and 3-4 on the road.

Meanwhile, the Minnesota Timberwolves have been in great form as they’ve won eight of their last 10 games and they will be aiming for a fourth straight win after blowing past the Mavericks by 111-87 on Friday. Jimmy Butler led the team with 21 points, Andrew Wiggins had 19 points while Jeff Teague chipped in with 15 points and 10 assists. As a team, the Timberwolves shot 46 percent from the field and 13 of 30 from the three-point line but they didn’t really wake up until the second half where they outscored the Mavericks by 68-32 to overcome a 12-point halftime deficit. With the win, Minnesota improved to 10-5 overall and 5-4 on the road.

The Pistons will be eager to atone for Friday’s loss to Indiana where they blew a 22-point lead, but they’ve run into the Timberwolves who are coming off their third straight win by double-digits. I wouldn’t be surprised if the Pistons won this game outright, but their only 3-4 on the road while the Timberwolves are a solid 5-1 at home. This could go either way, but I have to stick with the Timberwolves who have covered in each of their last four home games.