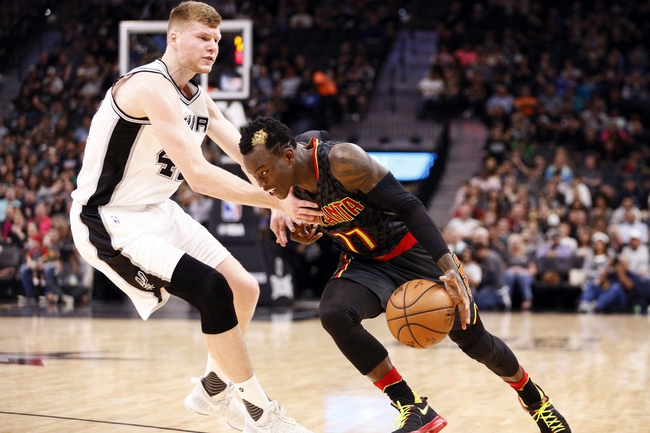 The San Antonio Spurs play host to the Atlanta Hawks at the AT&T Center on Monday night.

The Atlanta Hawks have won just three of their first 16 games of the season and they will be hoping to bounce back from Saturday’s 110-99 loss to the Celtics. Dennis Schroder led the way with 23 points and nine assists, Kent Bazemore added 19 points while John Collins chipped in with 18 points off the bench. As a team, the Hawks shot 47 percent from the field and nine of 24 from the three-point line as they stormed out to lead by as many as 15 points in the first quarter before getting outscored by 90-64 in the final three quarters. With the loss, Atlanta dropped to 3-13 overall and 1-5 at home.

Meanwhile, the San Antonio Spurs have won six of their last eight games and they will be feeling pretty good following their 104-101 home win over the Thunder. LaMarcus Aldridge led the way with 26 points and nine rebounds, Danny Green added 17 points while Pau Gasol chipped in with 14 points and eight rebounds. As a team, the Spurs shot 44 percent from the field and 14 of 35 from the three-point line as they rallied all the way back from a 23-point deficit to beat the Thunder in dramatic fashion. With the win, San Antonio improved to 10-6 on the season and 7-2 at home where they have won five of their last six games.

The Spurs will be full of confidence after their dramatic comeback win over the Thunder but there’s always a chance of a letdown performance after a game like that. However, the Spurs will learn from their slow start against the Thunder and I expect them to come out firing against the struggling Hawks who just can’t buy a win at the moment. The Spurs have covered in five of their last six home games and I don’t the Hawks bucking that trend in this one.