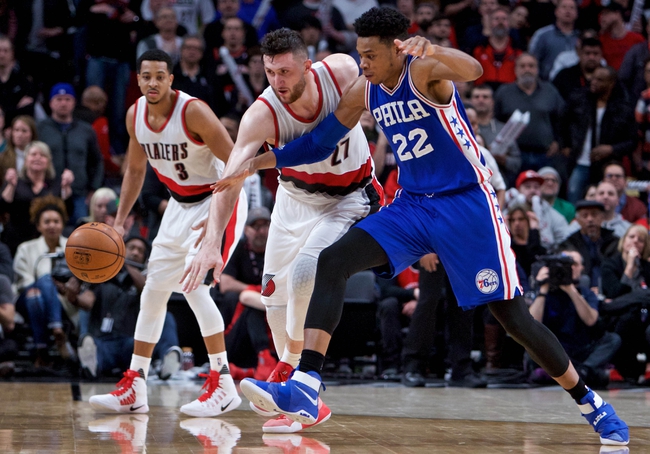 The Portland Trailblazers pay a visit to the Philadelphia 76ers at the Wells Fargo Center on Wednesday.

The Portland Trailblazers have won four of their last five games and they will be aiming for a third straight victory after escaping Memphis with a 100-92 win on Monday. CJ McCollum led the way with 24 points, Damian Lillard added 21 points with four assists while Shabazz Napier provided the spark off the bench with 16 points. As a team, the Trailblazers shot just 39 percent from the field and six of 15 from the three-point line, but it came good in the final 6:23 of the game where the Blazers outscored the Grizzlies by 20-12. With the win, Portland improved to 10-7 overall and 3-3 on the road.

Meanwhile, the Philadelphia 76ers have won three of their last four games and they will be aiming to build on Monday’s 107-86 win over the Jazz. Ben Simmons continued his great rookie season with a team-high 27 points with 10 rebounds and four steals, JJ Redick shook off his shooting slump to add 20 points, while Joel Embiid chipped in with 15 points and 11 rebounds. As a team, the 76ers shot 51 percent from the field while holding the Jazz to just 35 percent shooting as they never looked threatened after jumping out to a 47-36 lead going into halftime. With the easy win, Philadelphia improved to 9-7 overall and 3-3 at home.

There was a chance that Lillard was going to miss this game, but he isn't listed on the injury report which is a big boost for the Blazers. However, the 76ers are starting to really heat up and they looked particularly good against the Jazz on Monday, so in what should be a close contest, I'm sticking with the 76ers to stay hot with a win and cover at home behind a big night from Embiid who should be able to put up big numbers in this one.