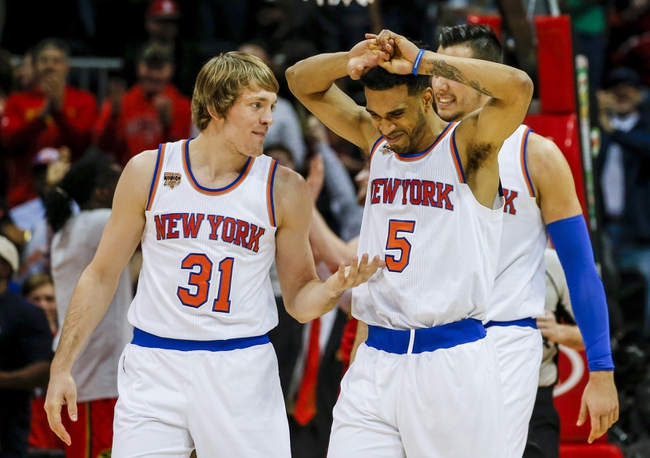 The New York Knicks and the Atlanta Hawks do battle at the Philips Arena on Friday night.

The New York Knicks are starting to build a bit of momentum as they’ve won four of their last six games and they will be aiming for a third straight victory after taking down the Raptors in a 108-100 home win on Wednesday. Tim Hardaway Jr. led the way with 38 points and seven assists, Kristaps Porzingis added 22 points with 12 rebounds and three blocks while Courtney Lee chipped in with 15 points and seven assists. As a team, the Knicks shot 46 percent from the field and eight of 24 from the three-point line but this game was all about the third quarter where the Knicks ambushed the Raptors and outscored them by a ridiculous 41-10 to quickly erase an 11-point halftime deficit. With the impressive win, New York improved to 10-7 on the season and 9-3 at home.

Meanwhile, the Atlanta Hawks are still stuck on just three wins for the season and they will be hoping to snap a three-game skid after getting blown out by the Clippers in a 116-103 home loss on Wednesday. Blake Griffin led the team with a triple-double of 26 points with 10 rebounds and 10 assists, Wesley Johnson added 24 points on eight of 10 shooting while Lou Williams stepped into the starting lineup and added 20 points with eight assists. As a team, the Clippers shot a sizzling 58 percent from the field and 15 of 30 from the three-point line as they dominated the second half by 54-40 to run away with the game. With the win, LA snaps an ugly nine-game skid and improves to 6-11 on the season.

The Knicks have covered in just one of their last six road games, but they’ve definitely been playing much better basketball lately and they looked particularly good in their win over the Raptors. Meanwhile, the Hawks just can’t buy a win lately so in what is a pick’em game, I’m going with the in-form Knicks to stay hot with another win in this one.