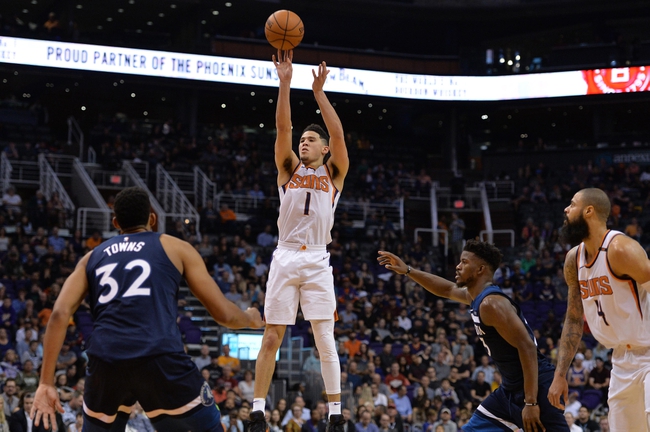 The Phoenix Suns and the Minnesota Timberwolves duke it out at the Target Center on Sunday night.

The Phoenix Suns have lost nine of their last 12 games and they will be hoping to snap a two-game skid after getting blown out by the Pelicans in a 115-91 rout on Friday. TJ Warren led the team in scoring with 18 points, Tyler Ulis added 17 points while Devin Booker chipped in with just 13 points. As a team, the Suns shot 39 percent from the field and just two of 20 from the three-point line but they were never really in the game as the Pelicans poured in 33 points in the first quarter and led by as many as 36 points in the third quarter in what was a one-sided affair. With the loss, Phoenix dropped to 7-13 on the season and 4-9 at home where they have lost four of their last five.

Meanwhile, the Minnesota Timberwolves have been playing some decent basketball as they’ve won four of their last seven games but they will be very disappointed with their effort in Friday’s 109-97 loss to the Heat. Andrew Wiggins, Karl-Anthony Towns and Jimmy Butler all finished with 18 points as the Timberwolves shot 44 percent from the field and seven of 17 from the three-point line. However, the Wolves were without their starting point guard in Jeff Teague and he is currently listed as questionable.

There is no official word on the status of Teague for this game, but the Timberwolves really should be good enough to beat this young Suns team by double digits with the starting lineup they have. The Suns have covered in just three of their last 12 games and have been particularly poor on the road, so I'm going with the Timberwolves to back on track with a double-digit win at home.