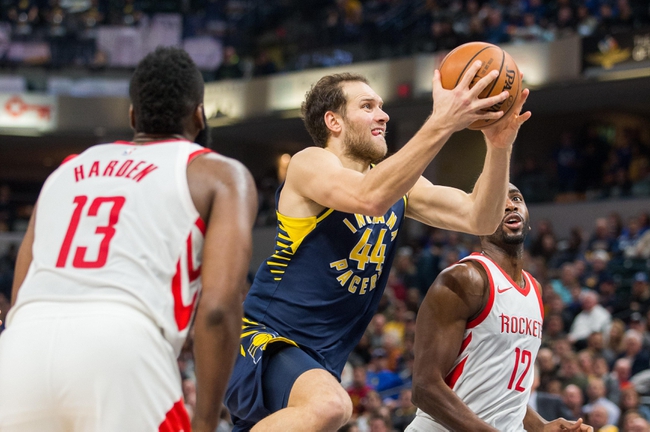 The Indiana Pacers pay a visit to the Houston Rockets at the Toyota Center on Wednesday night.

The Indiana Pacers have won six of their last seven games and they will be hoping to build on Monday’s 121-109 home win over the Magic. Victor Oladipo looked great as he led the way with 26 points on 11 of 14 shooting to along with six rebounds, five assists, two steals and four blocks. Bojan Bogdanovic added 22 points while Domantas Sabonis added 19 points off the bench. As a team, the Pacers had five players finish with 18 points or higher and they shot a healthy 53 percent from the field as a team as they outscored the Magic by 36-25 in the fourth quarter to run away with the game. With the win, Indiana improved to 12-9 on the season and 6-4 at home.

Meanwhile, the Houston Rockets have absolutely been on a tear as they’ve won 11 of their last 12 games and they will be gunning for a sixth straight victory after beating the Nets by 117-103 on Monday. James Harden led the team with 37 points, 10 rebounds and eight assists, Clint Capela added 20 points while Chris Paul scored just four points and 14 assists. As a team, the Rockets shot 48 percent from the field and 20 of 50 from the three-point line as they stormed out to a 43-26 lead at the end of the first quarter and never looked back. With the win, Houston improved to 16-4 on the season and 7-3 at home.

Head to head, the under is 4-0 in the last four meetings and the favorite is 7-2 ATS in the last nine meetings.

The Rockets have just been on fire lately as they've won five straight games by double digits, but the Pacers are starting to play some of their best basketball of the season so an upset isn't out of the question. With Paul back in the lineup for the Rockets, they've looked like a team on another level but they haven't been covering at home lately, so I'm taking the Pacers with the points in this one.