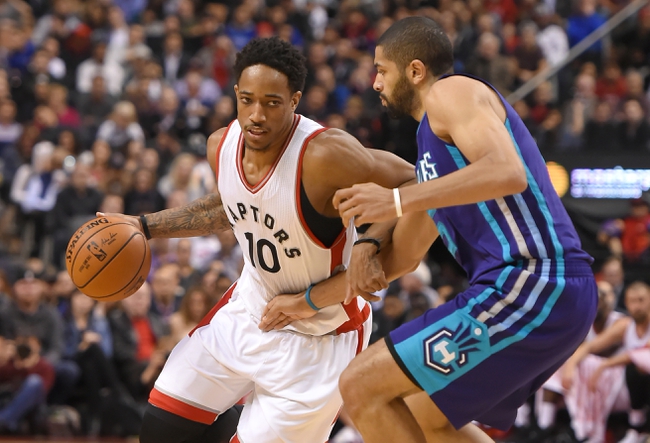 The Charlotte Hornets and the Toronto Raptors duke it out at the Air Canada Centre on Wednesday night.

The Charlotte Hornets have lost eight of their last 11 games and they will be hoping to bounce back from Saturday’s 106-86 loss to the Spurs. Kemba Walker led the team with 18 points and five assists while Jeremy Lamb and Frank Kaminsky chipped in with 12 points each. As a team, the Hornets shot just 37 percent from the field and just four of 25 from the three-point line as they couldn’t make up any ground after falling behind by double-digits in the second quarter. The Hornets were playing their third game in four nights and it showed as they fell to 8-11 on the season and 1-8 on the road.

Meanwhile, the Toronto Raptors have won five of their last seven games and they were able to snap a two-game skid with a 112-78 blowout win at Atlanta on Saturday. As a team, the Raptors shot 55 percent from the field and 13 of 32 from the three-point line as they took the game away from the Hawks early, outscoring them by 39-14 in the second quarter to lead by 28 points heading into halftime. Norman Powell led the scoring with 17 points off the bench, Jonas Valanciunas added 16 points while Kyle Lowry chipped in with 15 points and six assists before sitting out the fourth quarter. With the easy win, Toronto improved to 12-7 on the season and 6-6 on the road.

The Hornets are struggling for consistency, except on the road where they’ve won just one of nine games all season. The Raptors were a little shaky at the start of the season but look to be in a groove now, so I expect them to win this one and win it easily at home where they four straight.