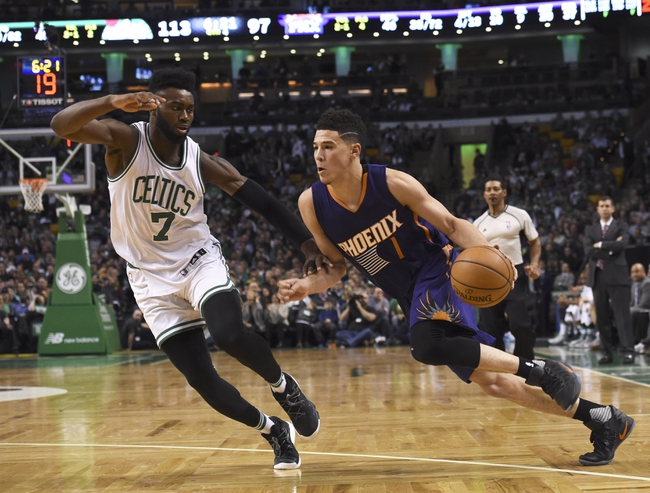 The Phoenix Suns and the Boston Celtics duke it out at the TD Garden on Saturday afternoon.

The Phoenix Suns have lost four of their last five games and they will still be tending to their wounds after getting ambushed by the Pistons in a 131-107 loss on Wednesday. Devin Booker led the team in scoring with 22 points on seven of eight shooting, Josh Jackson added 20 points off the bench while Greg Monroe chipped in with 14 points and five assists. As a team, the Suns shot 46 percent from the field and seven of 22 from the three-point line, but they were always fighting an uphill battle after falling behind by 17 points after the first quarter and by as many as 33 points in the first half. With the loss, Phoenix dropped to 8-15 on the season and 4-6 on the road.

Meanwhile, the Boston Celtics have won three of their last four games since having their 16-game win streak snapped and they will be looking to stay hot after beating the 76ers by 108-97 on Thursday. Kyrie Irving led the way with 36 points on 12 of 21 shooting, Al Horford added 21 points with five assists while Marcus Morris added 17 points off the bench. As a team, the Celtics shot 50 percent from the field and 12 of 29 from the three-point line but in a close contest, they leaned heavily on Irving who scored nine points in the fourth quarter. With the win, Boston improved to a league-best 19-4 on the season and 9-2 at home.

The Suns have been in poor form and are in need of a win after getting embarrassed by the Pistons on Wednesday. The Celtics haven’t slowed down since having their win streak snapped and they looked particularly good against the upstart 76ers on Thursday, so I’m sticking with the boys in green to earn the win and cover at home where they’ve been dominant this season.