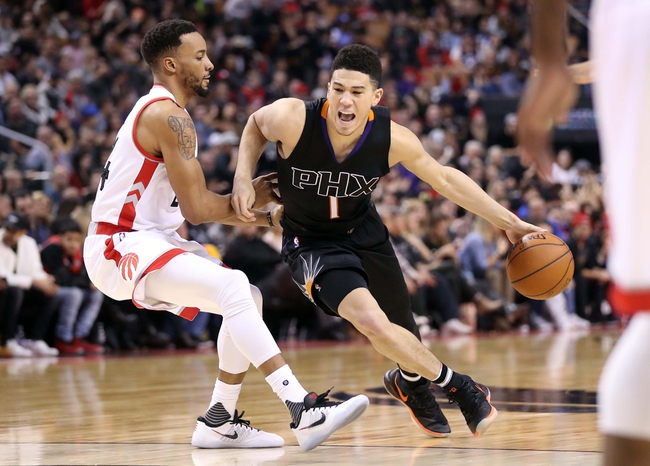 The Phoenix Suns pay a visit to the Toronto Raptors at the Air Canada Centre on Tuesday night.

The Phoenix Suns have lost five of their last seven games but they will be looking to build on last night’s 115-101 upset win at Philadelphia. Devin Booker poured in 32 points in the second half to finish with a game-high 46 points on 17 of 32 shooting, TJ Warren added 25 points while Tyler Ulis chipped in with 12 points and 12 assists. As a team, the Suns shot 48 percent from the field and 10 of 22 from the three-point line as they held off the 76ers who drained just seven of their 30 three-point attempts. With the unlikely win, Phoenix improved to 9-16 on the season and 5-7 on the road where they’ve lost three of their last five.

Meanwhile, the Toronto Raptors have won seven of their last nine games and they will be gunning for a fourth straight win after taking down the Pacers in a 120-115 home win on Friday. DeMar DeRozan led the way with 26 points and five assists, Jakob Poeltl made all of his eight shots to provide 18 points off the bench while Serge Ibaka chipped in with 15 points. As a team, the Raptors shot 49 percent from the field and 10 of 32 from the three-point line but where they dominated was in the paint where they outscored the Pacers by 70-44. With the win, Toronto improved to 14-7 on the season and 8-1 at home.

The Suns looked great in last night’s big win over the 76ers but this game will be their third road game in four nights and they’re up against a red-hot Raptors team who have only lost one of their nine home games so far. It’s hard to see anything but a win for the Raptors who will be well-rested, but I think the Suns will surprise us a little and keep this one close till the end.