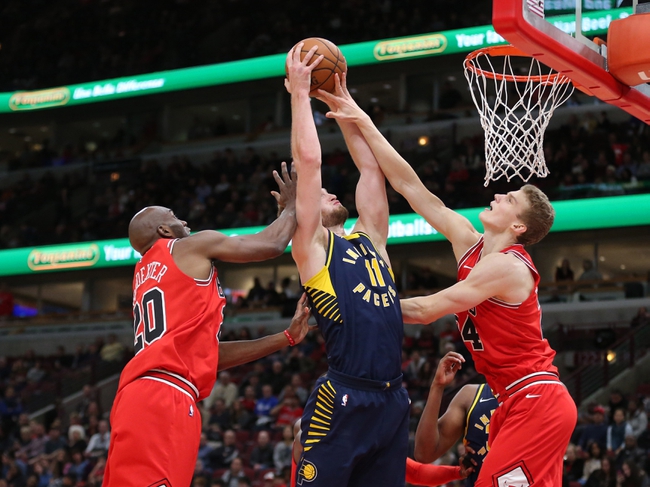 The Chicago Bulls and the Indiana Pacers duke it out at Bankers Life Fieldhouse on Wednesday night.

The Chicago Bulls will be eager to put a halt to an ugly nine-game losing streak after getting blown out by the Cavaliers in a 113-91 loss on Monday. Kris Dunn led the team in scoring with 15 points while Robin Lopez and Justin Holiday chipped in with 14 points each. As a team, the Bulls shot 41 percent from the field and nine of 34 from the three-point line but the Bulls never looked threatening after trailing by 61-45 heading into halftime. While the Bulls didn’t stand a chance against the red-hot Cavaliers on Monday, they have actually been tough to put away as their four losses prior to Monday were all by single digits. With the loss, Chicago dropped to 3-19 on the season and 2-8 at home.

Meanwhile, the Indiana Pacers have lost three of their last five games but they were able to put a halt to a two-game skid with a 115-97 blowout win over the Knicks on Monday. Thaddeus Young led the way with an efficient 20 points on nine of 11 shooting, Bojan Bogdanovic added 19 points while Victor Oladipo chipped in with 16 points. As a team, the Pacers shot 53 percent from the field and 11 of 26 from the three-point line as they put the game away early after dominating the first half by 66-40. To be fair, the Knicks were severely shorthanded as they were without their two top scorers in Kristaps Porzingis and Tim Hardaway Jr. With the easy win, Indiana improved to 13-11 on the season and 7-4 at home.

The Bulls will be eager to bounce back after getting blown out by the Cavaliers in their last game, but they’ve won just one of their first 12 road games. With that being said, the Pacers haven’t exactly been world beaters as they were struggling themselves before Monday’s big win over the shorthanded Knicks. I think the Bulls will hang around for most of the game, but the betting trends are in favor of the Pacers in this one so that’s where I’m leaning.