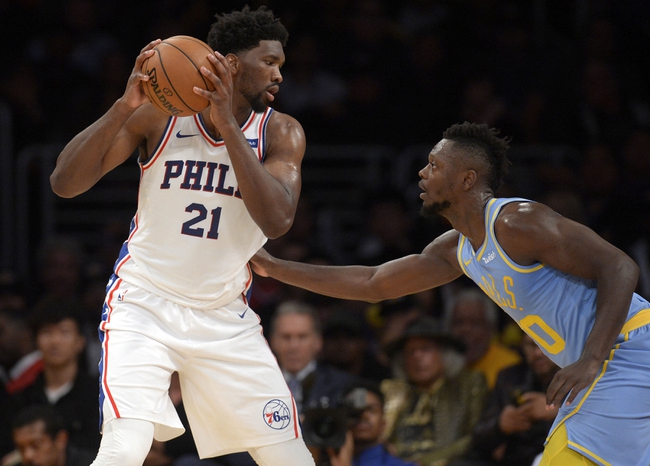 The Los Angeles Lakers pay a visit to the Philadelphia 76ers at the Wells Fargo Center on Thursday night.

The Los Angeles Lakers have lost seven of their last nine games and they will be hoping to snap a five-game skid after getting blown out by the Rockets in a 118-95 loss on Sunday. Kyle Kuzma led the team in scoring with 22 points and 12 rebounds off the bench, Brandon Ingram added 18 points with nine rebounds and five assists while Kentavious Caldwell-Pope chipped in with 16 points. As a team, the Lakers shot 38 percent from the field and nine of 28 from the three-point line but they were fighting a losing battle from the second quarter where they were outscored by 34-19. Lonzo Ball had another rough game as he finished with just two points and three assists while playing just 22 minutes. With the loss, Los Angeles dropped to 8-15 on the season and 6-7 at home.

Meanwhile, the Philadelphia 76ers have split their last six games and they will be looking to bounce back after getting routed by the Suns in a 115-101 loss on Monday. JJ Redick led the team in scoring with 25 points on nine of 16 shooting, Joel Embiid added 22 points with 12 rebounds and four blocks while Ben Simmons had 20 points with eight rebounds, seven assists and six steals. As a team, the 76ers shot 43 percent from the field and seven of 30 from the three-point line but there was just no stopping the Suns’ Devin Booker who torched them for 46 points on 17 of 32 shooting. With the loss, Philadelphia dropped to 13-10 overall and 7-5 at home where they’ve won five of their last seven.

The 76ers have certainly had some great moments this season, but they’ve also laid a few eggs and Monday’s loss to the Suns was just that. However, I do think the 76ers bounce back with a double-digit win at home as the Lakers have been a mess lately, especially on the road where they’ve won just two of their first 10 games this season.