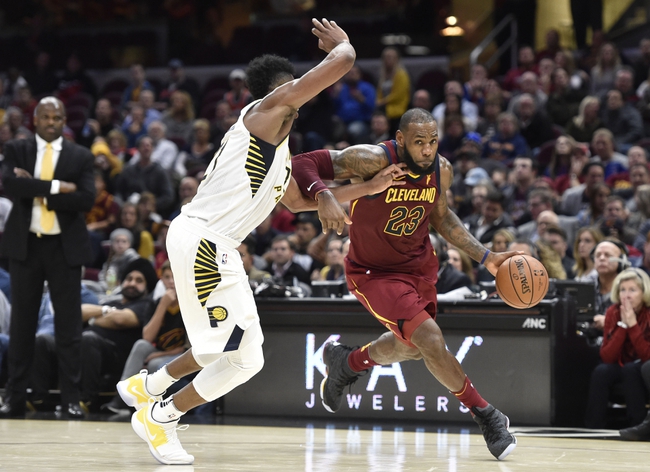 LeBron James and the Cleveland Cavaliers pay a visit to the Indiana Pacers at Bankers Life Fieldhouse on Friday.

The Cleveland Cavaliers will be aiming for a 14th straight win after pulling off the great escape against the Kings in a 101-95 win on Wednesday. LeBron James led the way with 32 points, 11 rebounds and nine assists, Kevin Love added 18 points with 13 rebounds while Jeff Green and Kyle Korver added 17 and 15 points respectively. As a team, the Cavaliers shot 47 percent from the field and 14 of 39 from the three-point line as they really had a tough time with the pesky Kings until the fourth quarter where they outscored the Kings by 28-17 to finish on top thanks to a clutch three-pointer from LeBron. With the victory, Cleveland improved to 18-7 overall and 9-4 at home.

Meanwhile, the Indiana Pacers have split their last six games but they will be aiming for a third straight victory after rallying from behind to escape with a 98-96 win over the Bulls on Wednesday night. Victor Oladipo led the team with 27 points on 10 of 20 shooting, Bojan Bogdanovic added 17 points, Darren Collison had 14 points while Myles Turner chipped in with 11 points, seven rebounds and six assists. As a team, the Pacers shot 44 percent from the field and 12 of 34 from the three-point line, but they really had to work for this one as they came out flat and found themselves trailing by double digits until the fourth quarter where they outscored the Bulls by 29-13, capped by a steal and clutch three from Oladipo. With the win, Indiana improved to 14-11 overall and 8-4 at home.

The Cavaliers are the hottest team in the league right now as they come into this game looking to break a franchise record for consecutive wins, but they haven’t been blowing teams off the court as nine of their last 13 wins have come by 10 points or less. The Pacers will be feeling pretty good following their big comeback win over the Bulls but it really should have been a walk in the park for them given how bad the Bulls have been this season. The road team has covered in the last six meetings and I expect that trend to continue tonight.