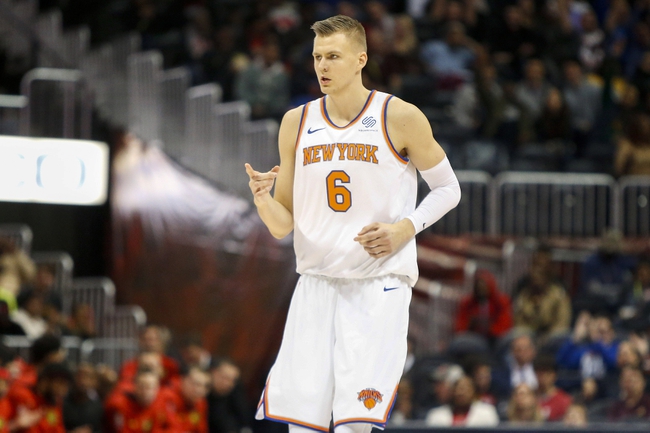 The New York Knicks and the Chicago Bulls collide at the United Center on Saturday night.

The New York Knicks have lost five of their last seven games but they will be looking to build on Wednesday’s 99-88 win over the slumping Grizzlies. Courtney Lee led the team with 24 points, Kristaps Porzingis added 18 points while Jarrett Jack chipped in with a double-double of 10 points with 10 assists. As a team, the Knicks shot 52 percent from the field and nine of 14 form the three-point line as they outscored the Grizzlies in the second and third quarter by a combined 53-35 thanks to their defensive effort to hold the Grizzlies to just 41 percent shooting. With the win, New York improved to 12-12 on the season and 11-5 at home.

Meanwhile, the Chicago Bulls have lost 15 of their last 17 games but they will be hoping to build some momentum after snapping a 10-game skid with a 119-111 overtime win last night. Lauri Markkanen led the way with a double-double of 24 points with 12 rebounds, Kris Dunn added 20 points with 12 assists while Robin Lopez and Justin Holiday chipped in with 19 and 17 points respectively. As a team, the Bulls shot 48 percent from the field and six of 18 from the three-point line as they regrouped and remained composed in the overtime period where they outscored the Hornets by 13-5. With the win, Chicago improved to 4-20 on the season and 2-12 on the road.

The Knicks will be looking for a bit of consistency as they struggled to string together wins with players like Porzingis and Hardaway Jr. missing from the lineup. The Knicks will be feeling much better following their win over the Grizzlies and they’ll be looking to back that up with another win over another slumping opponent. I think the Bulls will take plenty of confidence from last night’s overtime victory as they’ve been pretty competitive in a lot of their recent losses, but I don’t think that feeling will last too long as the Knicks have covered in the last five meetings.