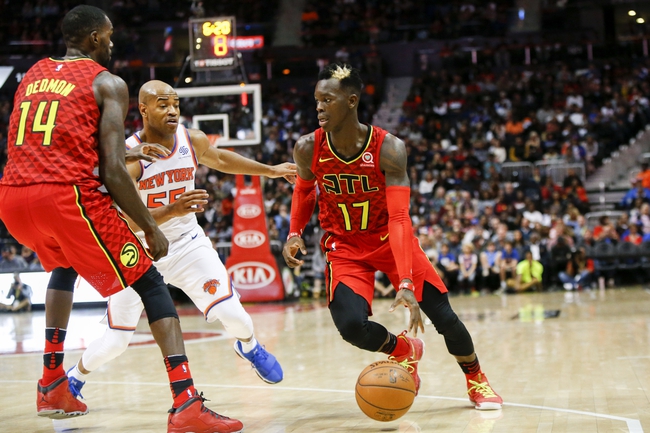 The Atlanta Hawks and the New York Knicks duke it out at Madison Square Garden on Sunday night.

The Atlanta Hawks are in need of a win as they’ve now lost seven of their last nine games following Wednesday’s 110-106 overtime defeat at Orlando. Dennis Schroder led the way with 26 points and seven assists, Taurean Prince added 19 points while Marco Belinelli chipped in with 12 points off the bench. As a team, the Hawks shot 43 percent from the field and 11 of 27 from the three-point line but they fell just short in overtime after blowing a three point lead with just 15 seconds left in regulation as they decided not to foul. With the loss, Atlanta falls to 5-19 on the season and 3-10 on the road.

Meanwhile, the New York Knicks have lost six of their last eight games and they will still be reeling from last night’s 104-102 to the lowly Bulls. Kristaps Porzingis led the team with 23 points, Courtney Lee added 14 points while Enes Kanter added 10 points with 11 rebounds and four assists. As a team, the Knicks shot 47 percent from the field and seven of 24 from the three-point line but they just couldn’t get over the line despite scoring 10 straight points to tie the game. With the loss, New York dropped to 12-13 on the season and just 1-8 on the road.

The Hawks have been playing better than their record suggests and the line for this game would probably be a little different had they held on to win against the Magic on Wednesday. The Knicks have been playing a little better with Porzingis back in the lineup, but they certainly didn’t look good last night against one of the league’s worst teams in the Bulls. This is a game I’d rather stay away from, but I think the value is with the Hawks and the points.