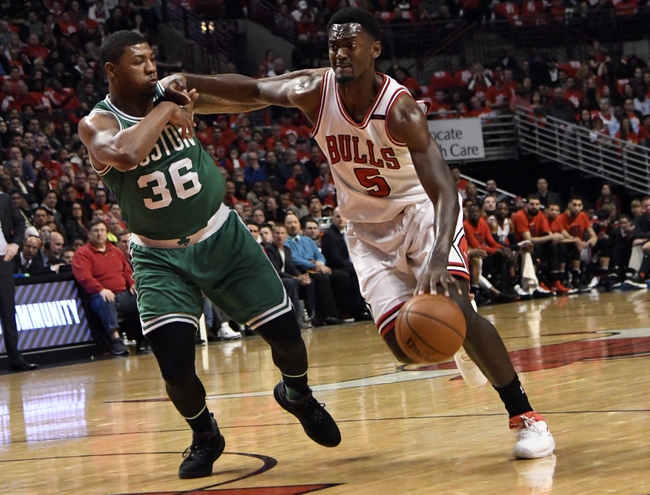 The Boston Celtics and the Chicago Bulls duke it out at the United Center on Monday night.

The Boston Celtics have won four of their last five games and they will be looking to back up yesterday’s 91-81 win at Detroit. Al Horford led the team in scoring with 18 points, nine rebounds and six assists, Kyrie Irving added just 16 points while Jaylen Brown and Marcus Smart added 12 points each. As a team, the Celtics shot just 42 percent from the field but they held the Pistons to just 33 percent from the field while neutralizing Andre Drummond and holding him to just one made field goal. With the win, Boston improved to 23-5 on the season and 11-3 on the road.   Marcus Morris sat out yesterday and is also expected to sit out tonight’s game.

Meanwhile, the Chicago Bulls have been struggling to start the season but they’ve found a bit of form with their second straight win after taking down the Knicks in a 104-102 win on Saturday. Nikola Mirotic drained five three-pointers en route to a team-high 19 points off the bench, Kris Dunn added 17 points with nine assists including the game-winning free throws while Lauri Markannen and David Nwaba chipped in with 15 points apiece. As a team, the Bulls shot 51 percent from the field to just hang on for the win after blowing a 10-point lead in the final 2:03 of the fourth quarter. With the win, Chicago improved to 5-20 on the season and 3-8 at home.

The Celtics have been one of the hottest teams in the league and they looked great in yesterday’s win over the Pistons, but they will be playing this one on zero days’ rest against a young Bulls team who have suddenly found some winning form. The Celtics are far and away the better team in this matchup and they should cruise to victory, but I think the pesky Bulls play out another close one as they’ve only lost by double-digits once in their last eight games.