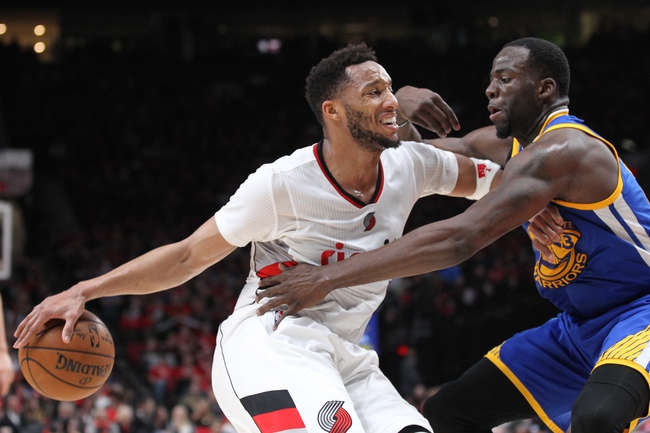 The Golden State Warriors play host to the Portland Trailblazers at the Oracle Arena on Monday night.

The Golden State Warriors have continued to play great team basketball without Stephen Curry as they look to build on their six-game win streak following their 102-98 win at Detroit on Friday. Kevin Durant has shouldered the majority of the scoring load with Curry out and he delivered again with 36 points, 10 rebounds and seven assists while Klay Thompson added 21 points. Draymond Green continues to struggle offensively as he scored just two points while missing all five of his three-point attempts, but he was contributed with 13 assists and six blocks. As a team, the Warriors shot 48 percent from the field and just seven of 26 from the three-point line, but they were good enough to hang on for the narrow win after the Pistons’ Reggie Jackson flopped on a no-call on the final drive for the Pistons. With the win, Golden State improved to 21-6 overall and 13-3 on the road.

Meanwhile, the Portland Trailblazers have really fallen off the pace with four straight losses after losing to the Rockets in a 124-117 shootout on Saturday.  Damian Lillard led the team with 35 points and six assists, CJ McCollum added 28 points while Al-Farouq Aminu chiped in with 15 points. As a team, the Trailblazers shot 41 percent from the field and 18 of 41 from the three-point line and they even led by as many as 14 points in the fourth quarter but it wasn’t enough to hold off the Rockets who exploded for 40 points in the fourth quarter, led by 48 points from James Harden. With the tough loss, Portland dropped to 13-12 on the season and 7-8 at home.

We can expect plenty of scoring in this one and the total seems to be on the move for all of the right reasons. While I don't like jumpng on public line movement generally, I am going with the over in this spot.