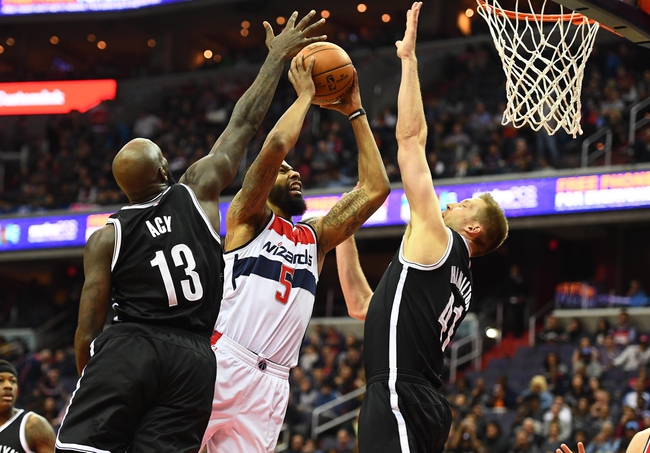 The Washington Wizards and the Brooklyn Nets do battle at the Barlays Center on Tuesday night.

The Washington Wizards have won four of their last seven games but they will be hoping to bounce back after Saturday’s 113-112 loss to the Clippers. Otto Porter Jr. led the way with 27 points, 11 rebounds and five assists, Bradley Beal added 25 points while Mike Scott scored 22 points off the bench. As a team, the Wizards shot 51 percent from the field while outrebounding the Clippers by 44-33 but with the Wizards were unable to hold on for the win as the Clippres’ Lou Williams drained the game-winning three with just 1.2 seconds left on the clock. With the heartbreaking loss, Washington dropped to 14-12 overall and 8-7 on the road.

Meanwhile, the Brooklyn Nets have been playing some of their best basketball to win four of their last seven games but they will be aiming to bounce back after falling to the Heat by 101-89 on Saturday in Mexico City. Rondae Hollis-Jefferson led the team with 18 points while Spencer Dinwiddie added 15 points with nine assists. As a team, the Nets shot only 40 percent from the field and seven of 27 from the three-point line as they faded in the second half where they were outscored by 51-36. It was a disappointing half from the Nets who were coming off a win over the Thunder, but the loss does drop them to 10-15 overall.

I’m not used to seeing the Nets winning games, but the truth is that they’ve been pretty competitive lately which is why they’ve covered in nine of their last 11 games. However, the line is just short enough for me to go with the Wizards who will come out firing after having their hearts broken in Saturday’s loss to the Clippers. It should be a close contest but I’m taking the Wizards to get the win and cover.