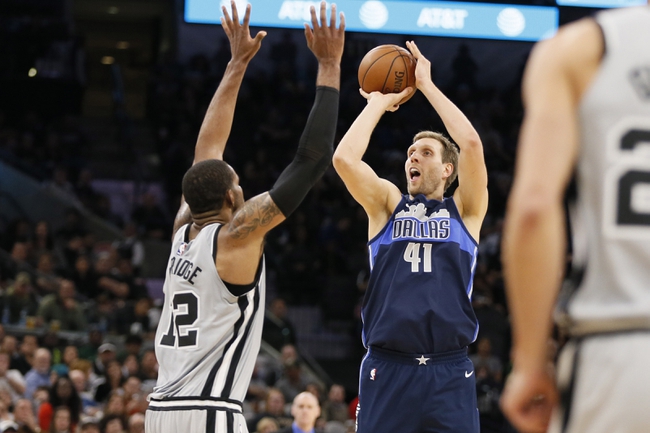 The San Antonio Spurs and the Dallas Mavericks square off at the American Airlines Center on Tuesday.

The San Antonio Spurs have been in great form as they’ve won eight of their last nine games and they will be gunning for a fifth straight win after sneaking past the Suns in a 104-101 road win on Saturday. LaMarcus Aldridge and Patty Mills led the team with 20 points each while Rudy Gay chipped in with 16 points on seven of 11 shooting. As a team, the Spurs shot 46 percent from the field and just six of 19 from the three-point line as they did just enough in the fourth quarter to hold on for the narrow win. To be fair, the Spurs were severely shorthanded themselves as they rested Pau Gasol and Manu Ginobili, while Danny Green and Kyle Anderson were both out with injuries. With the win, San Antonio improved to 19-8 on the season and 6-6 on the road. The big news is that Kawhi Leonard is listed as probable to make his season debut on Tuesday.

Meanwhile, the Dallas Mavericks have lost five of their last seven games and they will be hoping to snap a three-game skid after falling to the Timberwolves in a 97-92 road loss on Sunday. Harrison Barnes led the team in scoring with 19 points, JJ Barea and Maximilian Kleber added 16 points each while Wesley Matthews chipped in with 14 points and four assists. As a team, the Mavericks shot 45 percent from the field and 11 of 31 from the three-point line but they failed to hold on for the win despite leading in the final two minutes of the game. With the loss, Dallas dropped to 7-20 overall and 2-10 on the road.

THe Spurs just always find a way to get it done and with Leonard back they find a way easier than they have been.