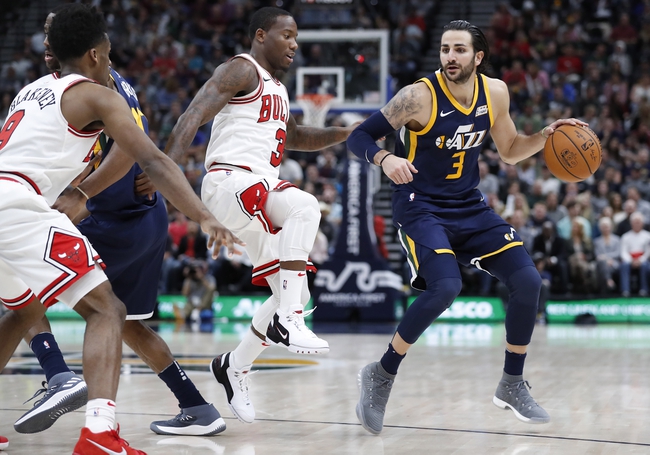 The Utah Jazz pay a visit to the Chicago Bulls at the United Center on Wednesday night.

The Utah Jazz will be eager to put a halt to a three-game losing streak after falling to the Bucks in a 117-100 road loss on Saturday. Rudy Gobert and Alec Burks led the team in scoring with 20 points each, Derrick Favors added 14 points while Joe Ingles chipped in with 12 points. As a team, the Jazz shot just 43 percent from the field and eight of 23 from the three-point line but they were always playing catch-up after falling behind by 16 points early in the second quarter. On the defensive end, the Jazz could do little to stop the Bucks’ Giannis Antetokounmpo who poured in 37 points and on the offensive end they needed more from Donovan Mitchell who shot just four of 17 for his 12 points. With the loss, Utah dropped to 13-14 on the season and 2-9 on the road.

Meanwhile, the Chicago Bulls won just three of their first 23 games of the season but are suddenly riding a season-high three-game win streak after blowing past the Celtics in a 108-85 upset win on Monday. Nikola Mirotic led the team in scoring with 24 points on nine of 14 shooting while Bobby Portis added 23 points off the bench. As a team, the Bulls shot 48 percent from the field while holding the Celtics to just 39 percent shooting as they outscored the Celtics by 28-13 in the second quarter to take control of the game and set up what was their best win of the season. With the win, Chicago improved to 6-20 on the season and 4-8 at home where they’ve won their last two.

The Jazz are far and away the better team in this matchup, but they've been struggling lately while the Bulls have been playing their best basketball of the season. I want to take the Bulls with the points as I think this will be a close contest, but I'm going to have to stick with the more reliable Jazz who have covered in their last five games against teams below .500.