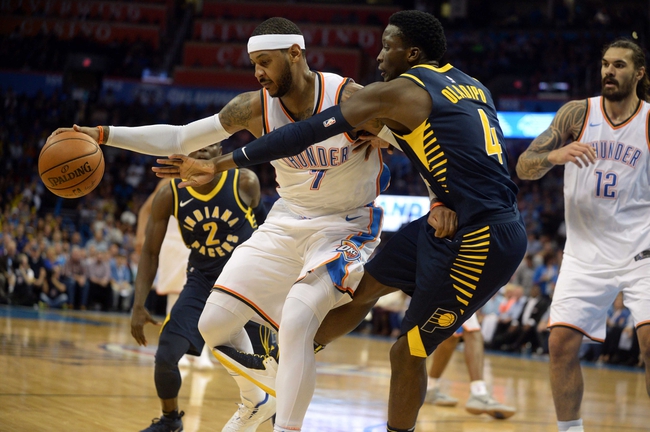 The Oklahoma City Thunder and the Indiana Pacers duke it out at the Bankers Life Fieldhouse on Wednesday night.

The Oklahoma City Thunder have won four of their last six games but they will be hoping to bounce back after falling to the Hornets in a 116-103 loss on Monday. Russell Westbrook led the team with 30 points and seven assists, Paul George added 20 points while Alex Abrines chipped in with 12 points. As a team, the Thunder shot just 41 percent from the field and nine of 26 from the three-point line as they failed to recover after the Hornets ambushed them with seven 3-pointers to finish with 40 points in the third quarter. With the loss, Oklahoma City fall to 12-14 on the season and 9-4 at home.

Meanwhile, the Indiana Pacers have been in great form as they aim for a fifth straight win following their 126-116 overtime win over the Nuggets on Sunday. Victor Oladipo continued his breakout season with 47 points on 15 of 28 shooting, Myles Turner added 24 points while Thaddeus Young chipped in with 18 points on eight of 11 shooting. As a team, the Pacers shot 52 percent from the field and 10 of 25 from the three-point line but where they really shone was on the defensive end as they held the Nuggets to just two points in the overtime period to come away with the win to improve to 16-11 overall and 10-4 at home.

Head to head, the over is 12-2 in the last 14 meetings in Indiana and the road team is 4-1 ATS in the last five meetings overall.

Cory Joseph is listed as questionable for Wednesday which means that Oladipo would have to play heavy minutes which might not be a bad thing. The Thunder have shown flashes of how good they can be, but they continue to drop in and out of games and it’s really costing them. I expect George to have a huge night against his former team, but the Pacers have been in great form, especially at home where they’ve covered in four of their last five games, so I’m going with the Pacers.