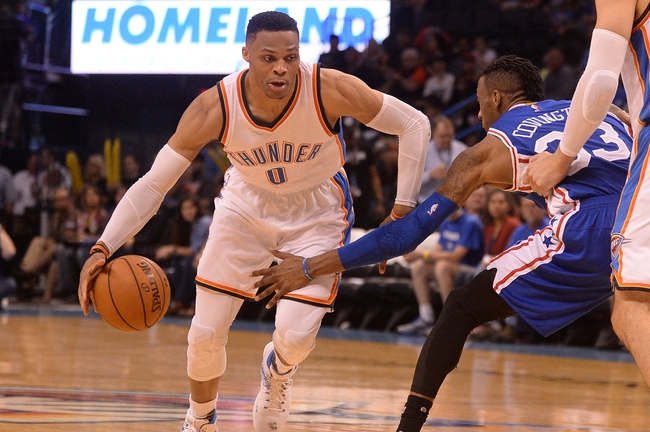 The Oklahoma City Thunder and the Philadelphia 76res do battle at the Wells Fargo Center on Friday night.

The Oklahoma City Thunder have won five of their last seven games and they will be looking to build on Wednesday’s 100-95 win at Indiana. It was a rough shooting night from the Big Three as Carmelo Anthony shot four of 14 for his 12 points, Paul George shot three of 14 for his 12 points while Russell Westbrook finished with a triple-double of 10 points, 17 rebounds and 12 assists while shooting just three of 17 from the field. As a team, the Thunder shot just 41 percent from the field and 13 of 29 from the three-point line but they leaned heavily on Steven Adams who delivered with a game-high 23 points on 11 of 16 shooting. With the win, Oklahoma City improved to 13-14 overall and 4-10 on the road.

Meanwhile, the Philadelphia 76ers have lost six of their last nine games but they were able to snap a four-game skid with a 118-112 overtime win at Minnesota on Tuesday. Joel Embiid returned from a two-game absence to lead the way with 28 points, 12 rebounds and eight assists, JJ Redick added 26 points while Ben Simmons finished with just seven points and eight assists. As a team, the 76ers shot 50 percent from the field and 11 of 26 from the three-point line as they outlasted the Timberwolves despite turning the ball over 24 times. With the win, Philadelphia improved to 14-13 on the season and 7-7 on the road where they had lost three in a row before Tuesday.

The Thunder have been winning games despite playing well below their best, but they’ve covered in just one of their last 10 games overall and one of their last 10 road games. With that being said, the 76ers were in a bit of a slump before their win over the Timberwolves so this one could go either way. I’m tempted to take the Thunder as the slight underdogs but I think the 76ers should be good enough to get the job done at home now that Embiid is back in the lineup.