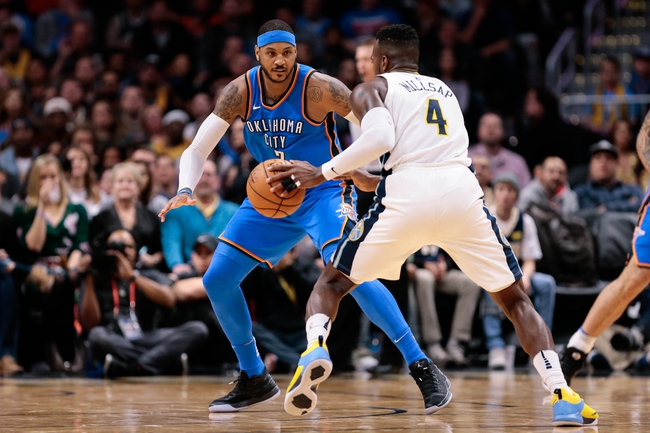 The Denver Nuggets and the Oklahoma City Thunder duke it out at the Chesapeake Energy Arena on Monday night.

The Denver Nuggets have split their last 16 games and they will be hoping to build on Friday’s 117-111 overtime win over the Pelicans. Gary Harris led the team with 21 points and five assists, Will Barton and Trey Lyles chipped in with 19 points each while Jamal Murray finished with 15 points. As a team, the Nuggets shot 46 percent from the field and 16 of 36 from the three-point line as they rallied back from a 16-point third-quarter deficit to force overtime where they outscored the Pelicans by 13-7 to come out on top. With the win, Denver improved to 16-13 overall and 11-2 at home where they are riding an eight-game win streak.

Meanwhile, the Oklahoma City Thunder have won six of their last nine games but they will still be nursing their wounds after getting blown out by the shorthanded Knicks in a 111-96 road loss on Saturday. Russell Westbrook led the way with 25 points, seven rebounds and seven assists, Paul George added 18 points with nine rebounds and four assists, but Carmelo Anthony was held scoreless in the second half as he finished with 12 points on five of 18 shooting. As a team, the Thunder shot 42 percent from the field and 12 of 27 from the three-point line as they fell to the Knicks who were playing without their two best players in Kristaps Porzingis and Tim Hardaway Jr. but the Thunder were always fighting an uphill battle as they had just played a triple-overtime game the previous night. With the loss, Oklahoma City dropped to 14-15 overall and 5-11 on the road.

The Nuggets will take a lot of confidence from their overtime win over the Pelicans on Friday, but on the road is where they really struggle as they’ve lost six of their last eight. The Thunder will be eager to get back on the court after getting blown out in their last game but their last two home games resulted in losses to the Nets and the Hornets so I just can't back them in this one. I'm tempted to take the Thunder but I think the value is with the Nuggets and the points in what should be a close contest.