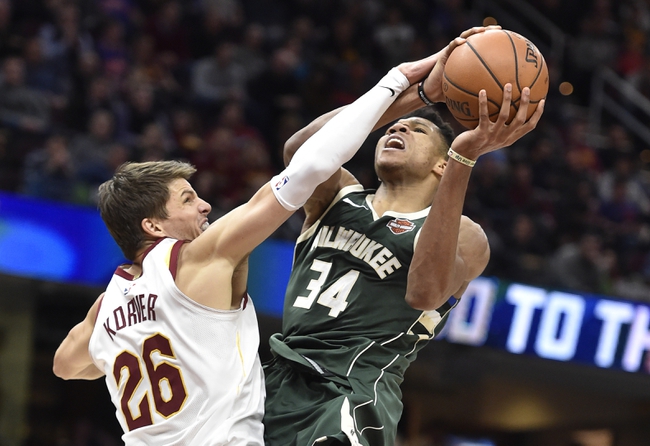 The Cleveland Cavaliers and the Milwaukee Bucks duke it out at the Bradley Center on Tuesday night.

The Cleveland Cavaliers have won 18 of their last 19 games and they will be aiming for a sixth straight victory after taking down the Wizards in a 106-99 road win on Sunday. LeBron James led the way with a triple-double of 20 points with 12 rebounds and 15 assists, Kevin Love led the team in scoring with 25 points while Jeff Green added 15 points off the bench. As a team, the Cavaliers shot 47 percent from the field and 14 of 34 from the three-point line, but they really couldn't gain any separation from the Wizards until the fourth quarter where they outscored them by 23-16 to come away with the narrow victory. With the win, Cleveland improved to 23-8 overall and 10-4 on the road where they have won eight of their last nine.

Meanwhile, the Milwaukee Bucks have won six of their last 10 games but they will be hoping to snap a three-game skid after getting edged out by the Rockets in a 115-111 loss on Saturday. James Harden led the way with 31 points and five assists, Chris Paul added 25 points with six assists while Nene Hilario and Eric Gordon chipped in with 16 points each. As a team, the Rockets shot 46 percent from the field and 11 of 35 from the three-point line as the Rockets really battled with the Bucks before putting them away with a 12-2 run early in the fourth quarter to lead by as many as 11 points before holding on for the narrow victory to improve to 24-4 overall and 12-3 at home.

The Bucks were able to push the red-hot Rockets to the edge on Saturday, but they'll have to do even better to beat the Cavaliers who have lost just one game since Nov 9. The Cavaliers haven't exactly been blowing the doors off teams but they just keep piling on the wins, so I'm sticking with them to get the win and cover in what is essentially a pick 'em situation.