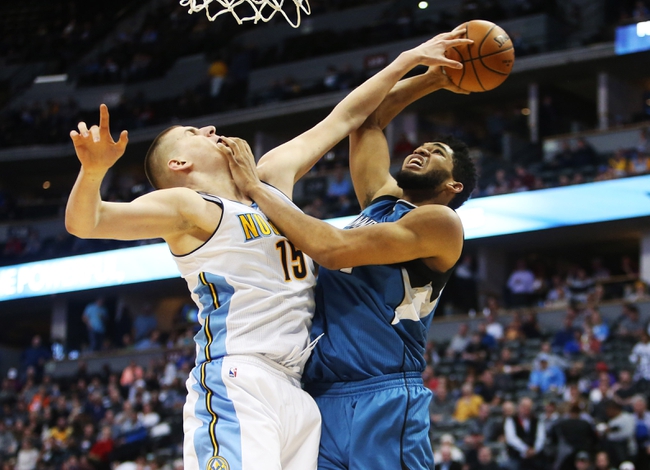 The Minnesota Timberwolves travel to the Pepsi Center to take on the Denver Nuggets on Wednesday night.

The Minnesota Timberwolves have won five of their past eight games and they will be feeling pretty good after sneaking past the Trailblazers by 108-107 on Monday. Jimmy Butler poured in 37 points on 12 of 21 shooting, Jamal Crawford added 23 points in just 23 minutes off the bench while Karl-Anthony Towns added 16 points. As a team, the Timberwolves shot 46 percent from the field and seven of 19 from the three-point line as they closed the game on an 11-6 to come away with the unlikely victory on clutch free-throws from Butler with just two seconds remaining. With the win, Minnesota improved to 18-13 overall and 11-6 at home.

Meanwhile, the Denver Nuggets have split their last six games and they will be hoping to bounce back after falling just short against the Thunder in a 95-94 road loss on Monday. Gary Harris led the team in scoring with 17 points and six assists, Trey Lyles added 15 points off the bench while Jamal Murray had just 10 points. As a team, the Nuggets shot just 43 percent from the field and 12 of 37 from the three-point line but they just couldn’t hold on for the win after leading by nine points early in the fourth quarter. With the loss, Denver dropped to 16-14 overall and 5-12 on the road where they have lost three of their last four.

The Timberwolves have been a little inconsistent lately but they will take plenty of confidence from their win over the Trailblazers on Monday. The Nuggets will be eager to come out firing after falling just short to the Thunder which makes for an interesting contest. It’s always tough to back against the Nuggets at home where they’ve won eight straight, but they’re a little banged up which opens up a great opportunity for the improving Timberwolves. I’m going with the road team Wolves to get the job done by single digits in this one.