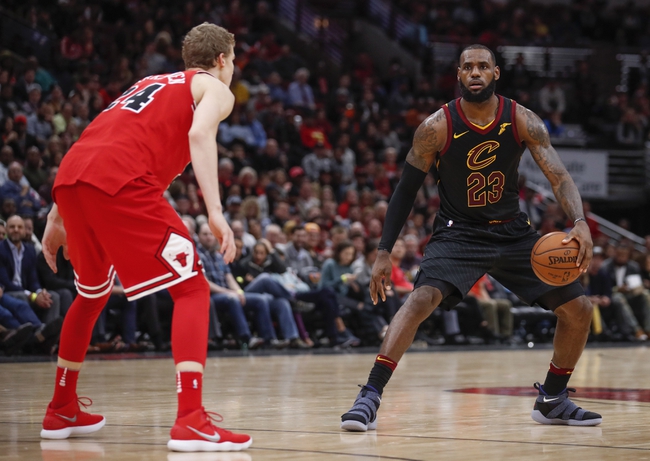 The Chicago Bulls and the Cleveland Cavaliers duke it out at the Quicken Loans Arena on Thursday night.

The Chicago Bulls will be looking to build on their current seven-game win streak after blowing away the Magic in a 112-94 home win last night. Danzel Valentine led the scoring with 16 points, 10 rebounds and five assists, Kris Dunn and Nikola Mirotic added 15 points each while Bobby Portis chipped in with 14 points. As a team, the Bulls shot 50 percent from the field and 11 of 33 from the three-point line as they outhustled and outplayed the Magic, especially in the third quarter where they outscored them by 31-18 to put the game to bed early. With the win, Chicago improved to 10-20 overall and 7-8 at home.

Meanwhile, the Cleveland Cavaliers will be aiming to bounce back after having their five-game win streak halted by the Bucks in a 119-116 road loss on Tuesday. LeBron James drained six 3-pointers on his way to a game-high 39 points with seven assists, Kevin Love added 21 points with 10 rebounds and four assists while Dwyane Wade chipped in with 14 points off the bench. As a team, the Cavaliers shot 50 percent from the field and 16 of 41 from the three-point line but they really had to work to stay in the game after getting blown out by 39-24 in the second quarter. The Cavs rallied in the second half and actually took a 113-112 lead with 2:04 left on the clock, but they just couldn’t get it done. With the loss, Cleveland dropped to 23-9 overall and 10-5 on the road.

The Cavaliers have been in great form but they will be eager to get back on the court after suffering a rare loss on Tuesday. However, I’ve been riding these Bulls for a while now and they looked as good as ever last night against the Magic. I’m definitely taking the Cavaliers to get back in the winner’s circle tonight, but I think these Bulls are good enough to keep this to single digits.