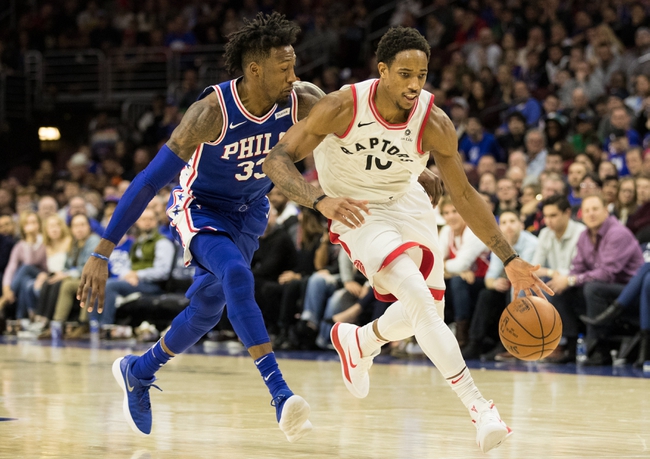 The Philadelphia 76ers and the Toronto Raptors duke it out at the Air Canada Centre on Saturday night.

The Philadelphia 76ers have lost eight of their last nine games and they will be aiming to bounce back after falling to the Raptors in a 114-109 loss on Thursday. Ben Simmons led the way with 20 points and four assists, Robert Covington added 19 points with five steals while Dario Saric flirted with a triple-double as he racked up 18 points with 10 rebounds and nine assists. As a team, the 76ers shot 52 percent from the field and nine of 29 from the three-point line but they just couldn’t hold off the Raptors despite leading by as many as 22 points on Thursday. Joel Embiid was listed as probable for Thursday but decided to sit out leaving his status for Saturday unclear at this point. With the loss, Philadelphia dropped to 14-17 overall and 7-9 at home.

Meanwhile, the Toronto Raptors have been on an absolute tear lately as they’ve won 11 of their last 12 games following their road win over the 76ers on Thursday. DeMar DeRozan poured in a season-high 45 points on 13 of 21 shooting, Kyle Lowry added 23 points while Serge Ibaka chipped in with 12 points. As a team, the Raptors shot just 41 percent from the field and 12 of 35 from the three-point line but DeRozan led the comeback charge, draining a career-high six three-pointers to lead the Raptors all the way back from a 22-point deficit. With the win, Toronto stays hot and improves to 22-8 overall and 11-7 on the road.

The 76ers have been stuck in a major rut and they will be looking to bounce back after blowing that massive lead against the Raptors on Thursday, but I don't think they get it done. The Raptors have just been piling on the wins lately and it hasn't just been DeRozan and Lowry doing all the work, so I'm taking the home team to get the win and cover against a shorthanded 76ers team struggling for wins.