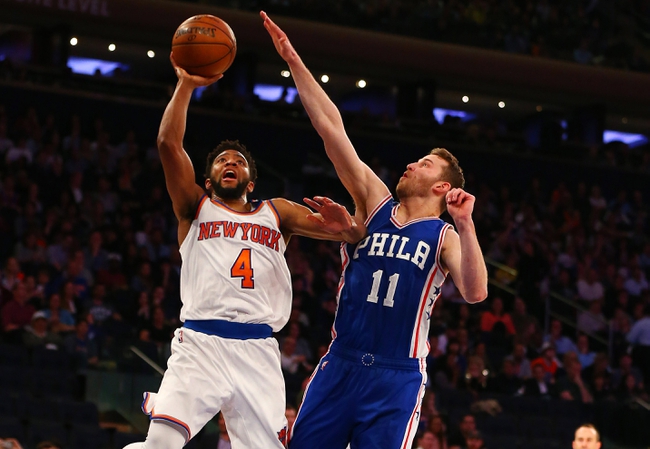 The Philadelphia 76ers and the New York Knicks duke it out on Christmas Day at Madison Square Garden.

The Philadelphia 76ers just haven’t been able to get it done lately as they’ve lost nine of their last 10 games and they will be hoping to snap a five-game skid after losing at Toronto in a 102-86 loss on Saturday. Dario Saric led the team in scoring with 17 points and five assists, Joel Embiid added 14 points while Amir Johnson chipped in with 12 points. As a team, the 76ers shot just 41 percent from the field and seven of 27 from the three-point line as they started well but fell away in the second and third quarters where they combined for just 36 points. Embiid played just 23 minutes as he is now on a minutes restriction while the team is still without JJ Redick who will miss his second game as he is dealing with a hamstring injury. With the loss, Philadelphia dropped to 14-18 overall and 7-9 on the road.

Meanwhile, the New York Knicks have won five of their last seven games but they will be looking to bounce back after falling to the Pistons in a 104-101 road loss on Friday. Kristaps Porzingis led the team with 29 points on 12 of 28 shooting, Enes Kanter added 22 points with 16 rebounds while Courtney Lee chipped in with 16 points and four assists. As a team, the Knicks shot 45 percent from the field and eight of 24 from the three-point line but fell just short to the Pistons who closed the game on a 9-2 run to snatch victory in a tight contest. With the loss, New York dropped to 17-15 overall and 2-10 on the road where they have lost their last two.

The 76ers are in a major slump but they’ve been competitive in most of their games as four of their last five losses have come by five points or less. However, the Knicks have been playing some of their best basketball of the season with Porzingis back on the court and I think they can stay hot at home where they’ve covered in 13 of their last 16 games.