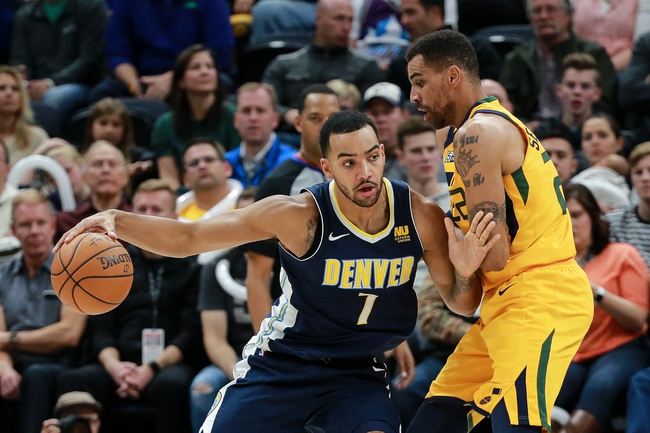 The Utah Jazz and the Denver Nuggets do battle at the Pepsi Center on Tuesday night.

The Utah Jazz have lost eight of their last 10 games and they will still be nursing their wounds after Saturday’s 103-89 home loss to the Thunder. Donovan Mitchell led the team with 29 points on 12 of 16 shooting while Derrick Favors and Thabo Sefolosha added 11 points each but no other player finished in double figures as the Jazz shot just 45 percent from the field and six of 26 from the three-point line. Defensively, the Jazz really missed Rudy Gobert as they just had no way of stopping Russell Westbrook who racked up a triple-double and Paul George who added 26 points. With the loss, Utah dropped to 15-19 overall and 12-6 at home.

Meanwhile, the Denver Nuggets have won four of their last six games and they will be gunning for a third straight win after blowing past the Warriors in a 96-81 road win on Saturday. Gary Harris led the team with 19 points, Nikola Jokic added 18 points while Trey Lyles and Wilson Chandler chipped in with 15 points each. As a team, the Nuggets shot 46 percent from the field and just seven of 28 from the three-point line but this win was all about their defense as they held the Warriors to just three of 27 shooting from the three-point line, resulting in a season-low 81 total points. With the win, Denver improved to 18-15 on the season and 11-3 at home where they have won eight of their last nine.

The Nuggets are a team on the rise and they will be full of confidence following their massive upset win over the Warriors. The Nuggets have covered in six of their last eight home games so I’m taking them to get the win and cover against the Jazz who have lost eight of their last 10 while covering in just three of their last 11.