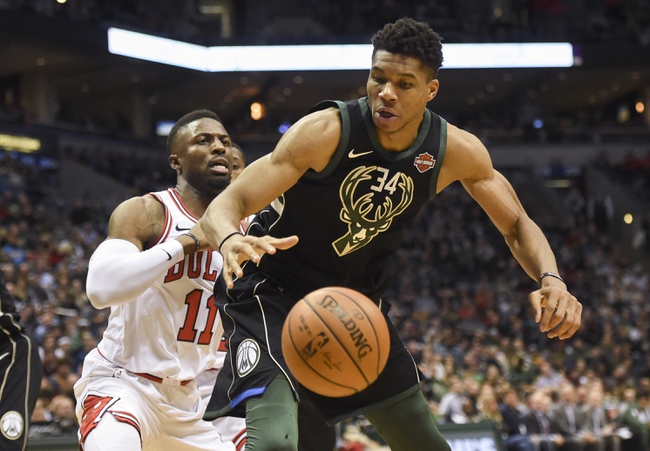 The Chicago Bulls pay a visit to the Milwaukee Bucks at the Bradley Center on Tuesday night.

The Chicago Bulls have really cooled off since their seven-game win streak as they are now looking to avoid a third straight loss after getting blown out at Boston by 117-92 on Saturday. Bobby Portis led the team with 17 points in just 21 minutes off the bench, Justin Holiday and Lauri Markkanen added 12 points each while Kris Dunn scored just two points on one of 12 shooting. As a team, the Bulls shot just 39 percent from the field and seven of 19 from the three-point line but this game was over before the fourth quarter as the Bulls just couldn’t recover after getting outscored by 38-18 in the third quarter. With the loss, Chicago fell to 10-22 overall and 3-14 on the road where they have lost two straight.

Meanwhile, the Milwaukee Bucks have lost four of their last six games and they had their two-game win streak snapped by the Hornets in a 111-106 loss on Saturday. Khris Middleton led the team with 31 points on 11 of 24 shooting, Eric Bledsoe and John Henson finished with 16 points each while Tony Snell chipped in with 11 points. As a team, the Bucks shot 48 percent from the field and eight of 26 from the three-point line but they just couldn’t hold off the Hornets despite leading by as many as 18 points. Giannis Antetokounmpo sat out the game due to soreness in his right knee but he is currently listed as probable for Tuesday. With the loss, Milwaukee dropped to 17-14 overall and 6-9 on the road where they have lost four straight.

The Bucks will be disappointed with the fact that they blew a big lead on Saturday and it cost them the game, but they will be buoyed if Antetokounmpo is able to return to action. I think the Bucks bounce back with a narrow win, but the Bulls were playing great basketball until their last two losses against the best of the Eastern Conference and I like their chances to keep this one close.