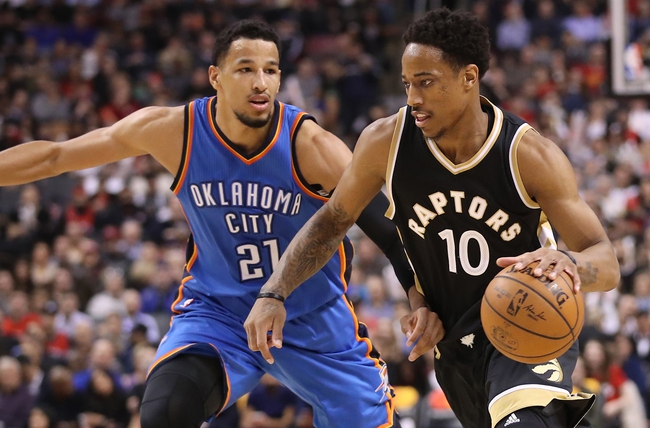 The Toronto Raptors pay a visit to the Oklahoma City Thunder at the Chesapeake Energy Arena on Wednesday night.

The Toronto Raptors have been one of the hottest teams in the league as they’ve won 12 of their last 14 games but they will be looking to bounce back after having their six-game win streak snapped in last night’s 98-93 loss to the Mavericks. Kyle Lowry led the team with 23 points, eight rebounds and six assists, Jonas Valanciunas added 17 points with 11 rebounds while Serge Ibaka added 11 points with 12 rebounds and three blocks. As a team, the Raptors shot just 33 percent from the field and nine of 31 from the three-point line in their worst offense showing of the season. DeMar DeRozan shot just three of 16 for his eight points while Lowry went scoreless in the fourth quarter and finished with six of 17 shooting from the field. With the loss, Toronto fell to 23-9 overall and 11-8 on the road.

Meanwhile, the Oklahoma City Thunder have won 11 of their last 14 games and they will be gunning for a season-high sixth straight victory after taking down the Rockets in a 112-107 win on Christmas Day. Russell Westbrook steered the offense with 31 points and 11 assists, Paul George added 23 points with four assists while Carmelo Anthony chipped in with 20 points on eight of 12 shooting. As a team, the Thunder shot 54 percent from the field and eight of 18 from the three-point line but this came down to whoever executed better in the fourth quarter where the Thunder outscored the Rockets by 24-19. With the win, Oklahoma City improved to 19-15 overall and 13-4 at home where they have won four straight.

The Raptors were really piling on the wins on a nightly basis before last night’s upset loss to the Mavericks, so I wouldn’t be surprised if they won this one outright. However, the Thunder are starting to play like the team we all envisioned at the start of the season and I think they can follow up their marquee win over the Rockets with another one on Wednesday.