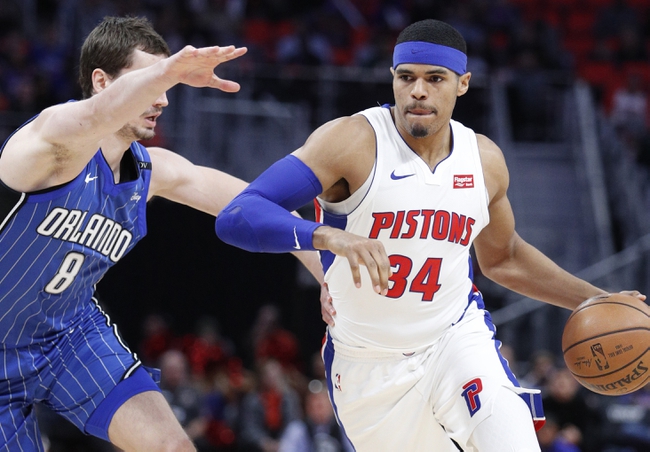 The Detroit Pistons invade the Amway Center to take on the Orlando Magic on Thursday night.

The Detroit Pistons have won five of their last six games and they will be gunning for a third straight victory after blowing past the Pacers in a 107-83 home win on Tuesday. Tobias Harris drained seven 3-pointers to finish with 30 points on 10 of 11 shooting, Andre Drummond added 21 points with 18 rebounds while Ish Smith chipped in with 12 points off the bench. As a team, the Pistons shot a healthy 50 percent from the field and 12 of 34 from the three-point line as they dominated the first quarter by 40-19 to lead by as many as 23 points before cruising in the second half. However, the win was a little bittersweet as Reggie Jackson left after 21 minutes of action with a sprained ankle and is expected to be out for six to eight weeks.

Meanwhile, the Orlando Magic have lost 11 of their last 13 games and they will be hoping to snap an ugly nine-game losing streak after falling to the Heat in a 107-89 road loss on Tuesday. Elfrid Payton led the team with 19 points while Evan Fournier and Mario Hezonja chipped in with 14 points each. As a team, the Magic shot just 40 percent from the field and five of 20 from the three-point line as they battled hard in a tied game heading into the fourth quarter, but that’s where it all unravelled  as the Heat outscored them by 39-21 in the quarter to run away with the game. With the loss, Orlando fell to 11-24 on the season and 5-15 on the road.

Head to head, the over is 7-3 in the last 10 meetings and the Pistons are 0-4 ATS in the last four meetings.

These two teams last met on Dec 17 and it was the Pistons who won by 114-110 behind 20 points from 20 points from Reggie Bullock. The Magic showed plenty of fight to keep the game close despite falling behind by 17 points going into halftime, but the Pistons did just enough to hold on for the win.  The Magic have hardly looked competitive since that game as they’ve been without Nikola Vucevic and I think their struggles continue in this one as the Pistons should be too good again, even without Jackson.